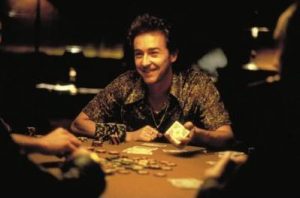 The Leonardo DiCaprio Foundation recently gave poker players and enthusiasts an opportunity to sit down at the felt with two of Hollywood’s biggest stars.

In a bid to raise funds and awareness for environmental research, DiCaprio’s foundation hosted its third annual auction on July 20 and one of the prizes was a poker date with Ed Norton and Jonah Hill.

For many in the community, Norton’s poker skills will be well-known thanks to his iconic performance in Rounders.

Moreover, Norton and DiCaprio have both been seen at events such as the WSOP and were even the subjects of a tell-all book on Hollywood home games by Molly Bloom.

In fact, when it comes to celebrity players, Norton is regarded as one of the best alongside another A-list actor, Ben Affleck.

With this in mind, a night of storytelling and poker action with Norton is a prize that any well-bankrolled player should want to bet on.

While Norton is undoubtedly a serious poker player, Hill’s association with the game is less clear.

Although he worked on a movie adaptation of a Wired Magazine article titled “Finding a Vegas Poker Bug Made These Guys Rich,” we don’t really know if he’s much of a player.

Regardless of the discrepancy in skills between the two Hollywood stars, both offered their services for the auction in the form of an evening filled with stories, betting, and laughter.

Ahead of the bidding, the official auctioneer Simon De Pury described the lot as an “unbelievable opportunity” for the winner to rub shoulders with the stars and improve their poker skills.

“You’ll receive coaching from one of the best poker players in the world, and hear stories over dinner about how the movie [Rounders] that launched the international poker craze was made,” read the listing.

With selection of “top poker professionals” scheduled to ante-up alongside Norton and Hill, the lot was attractive enough for one bidder who registered a winning bet of $121,300.

Clearly wanting a chance to meet the actors and test their mettle at the table, the unknown bidder raised the pot just enough to scare off any opponents and will now work to set a date for his celebrity showdown.

Overall the charity auction raised a record $45 million which DiCaprio’s foundation will now use to help fund projects that aim to tackle climate change around the world.