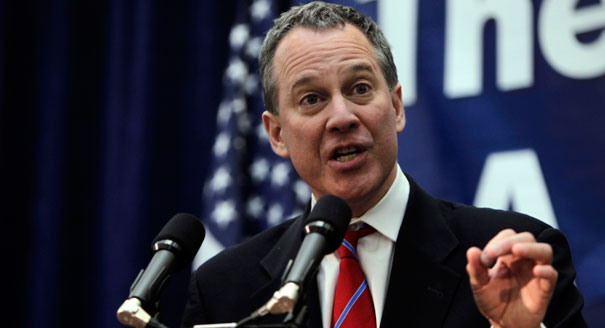 A previous joint motion by primary industry sites DraftKings and FanDuel to impose a temporary restraining order (TRO) on exactly this action apparently failed to achieve its goal.

An additional request by the two DFS operators for an expedited hearing to resolve the matter had been granted and will take place next Wednesday, November 25.

DraftKings had claimed that the AG declared in court yesterday that no action would be taken against the company before the date of the hearing, which would appear to render the TRO unnecessary in the first place. But Schneiderman clearly saw things differently.

Both DraftKings and FanDuel still offer games to residents of New York in defiance of  Schneiderman’s cease-and-desist letter of last week, which accused the sites of offering illegal gambling in the state.

“We Intend to Continue Operating”

“The Court granted our order setting this case for an emergency hearing next Wednesday,” read the DraftKings statement. “The AG assured the Court he will take no action against DraftKings or its business partners before then.

“On that record, and because there will be an emergency hearing next week, the Court determined that no TRO was necessary. We are confident in our legal position, and look forward to our day in court next week. As a result, we intend to continue operating in New York.”

However, to confuse matters, CNBC reporter Jessica Golden reported that an unnamed spokesperson from within the AG’s office stated that these assurances were not made in court, and with this latest action, the two DFS sites could still face an injunction against them before the hearing next Wednesday.

DraftKings and FanDuel appear to be standing on the brink of a very difficult legal battle. Things don’t look too good for the two operators, according to attorney Daniel Wallach, a Florida-based sports and gaming law expert.

“If a judge denies their motion for a preliminary injunction, that’s a pretty strong signal that he’s not going to rule in their favor following a trial,” Wallach told USA TODAY. “It means a great deal to both sides. Whoever gets the preliminary injunction in their favor is going to be dealt a very strong hand for the remainder of the case. It’s such an extraordinary remedy. A judge would not grant it to one party or the other without a strong showing on the merits.”

On Monday, FanDuel publicly accused Schneiderman’s office of interfering with its third-party payment processors, a claim that was flatly denied by the AG’s office.

A previous deal between DraftKings and World Series of Poker was severed after the Nevada Gaming Commission banned DFS in the Silver State, and hundreds of felt table coverings had to be replaced before the November Nine Main Event final table airing, as they all bore DraftKings’ logos that had been put in place last summer when the tides had not yet turned.

if DraftKings had publically traded stock I would be shorting it big time !