In 2016 players spent $3.26 billion in buy-ins for DFS contests; growth of just 4 percent on the previous year. That’s in stark contrast to 2016, which saw a stratospheric 222 percent growth. 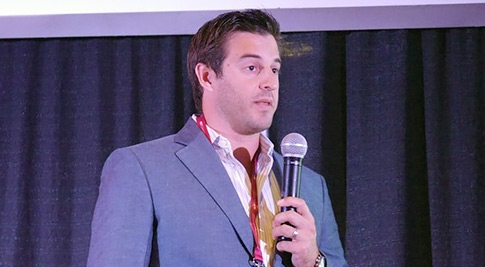 Adam Krejcik, of Eilers & Krejcik Gaming, says that the slowdown in growth of the DFS industry is not such a bad thing, especially “in light of the regulatory headwinds and the reduction in sales and marketing.” (Image: yogonet.com)

A slowdown was to be expected; DFS exploded in 2015, with market-leaders DraftKings and FanDuel splurging multiple millions on TV spots in a bid to out-market one another.

These campaigns brought them into mainstream consciousness and were funded by hundreds of millions in mainstream investment.

In 2015, DraftKings was just three years old, still only a start-up, but a start-up that could raise $300 million in investment for its planned global expansion from the likes of Fox Sports. In 2015 the sites collectively spent around $200 million on TV advertising alone.

But by early 2016, they were facing an existential crisis in the form of an injunction from the New York Attorney General’s office that threatened them with billions in fines, enough to sink them both.

Instead of international expansion and advertising campaigns, most of the companies’ cash was spent on in legal and lobbying fees, fighting their corner in the face of regulatory uncertainty and, in certain cases, downright hostility.

By the end of the year, they were cash-strapped and beginning to crack under the strain. Reports suggested both companies were months behind with payments to suppliers, lawyers and lobbyists. The long-expected merger between the two companies was announced in November.

A consolidated company will save huge amounts of money and will be able to refocus, to a degree, on advertising and marketing campaigns, but it’s unlikely to be anything like blitz we saw in 2015. With 90 to 95 percent of the market share, the enlarged company no longer needs to outmuscle any competitors.

“[Four percent growth] is not bad, in light of the regulatory headwinds and the reduction in sales and marketing,” Adam Krejcik, the report’s main author, told the Boston Globe this week. “There are so many variables that it’s tough to say [what caused the slowdown]. But basically, we’re saying that you’re not going to see 200 percent growth year over year.”

Ultimately, the $3 billion in player fees attained in 2015 was sustained in 2016, and this is now “a nice, sustainable floor for the business,” said Krejcik, who believes annual growth through 2020 will probably range between 5 and 15 percent.

I must be stupid because I never win.. I’m about done depositing into dfs. I’ll play free games only. It’s unfair that novices end up playing with pros. I don’t have sponsors etc. I’m sure we will find one day that it’s all rigged anyhow. Like the poker sites..