Yes, it’s over, but even as this year’s World Series of Poker November Nine are counting their winnings, they’re also going to be spending the next few months getting their game into top form for the big money ahead. CardsChat reporter Jennifer Newell takes an in-depth look at who they are, what they’ve done, and what they will likely bring to the table in terms of skill. 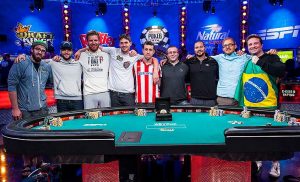 All the members of the WSOP 2014 November Nine celebrating their good fortune. (Image: WSOP)

When the 2014 World Series of Poker wrapped its summer of tournaments late into the night of July 14, there were nine players with chips. The November Nine are the ones who made the coveted $10K NLHE Main Event final table, and they will return to the Rio in Las Vegas in early November to play on for the win. And, of course, there is $10 million awaiting the last man standing as well.

Let’s take a look at those players, in the order that they are seated at the poker table.

Billy Pappas, as he calls himself for ease of pronunciation, has 17.5 million chips and is in sixth place on the nine-person leaderboard. He is 29 years old and hails from Lowell, Massachusetts.

He is a global foosball champion, having won five US titles and several world championships. In a few weeks, he is scheduled to travel to Germany to play in another foosball challenge. And it is his experience with that game that he claims gave him the stamina and focus to do well in poker.

This was the first time he played the WSOP Main Event. He does have some poker tournament experience, though. He has numerous final tables under his belt at events like the Foxwoods Poker Classic and WSOP Circuit, with his highest score before the Main Event recorded as fifth place in a $580 NLHE Reentry WSOP Circuit event at West Palm Beach last year for $52,372.

The only Norwegian at the table has 32,775,000 chips, good for second place when the table restarts. The 23-year-old is from Oslo, Norway, but currently lives in London.

The young man calls himself a professional poker player but mainly focuses on PLO cash games online. He claims to not like tournaments much, nor the travel involved to play them.

Felix has only two tournament scores on record prior to the WSOP Main Event, one at the EPT Barcelona Main Event last year and the other a 12th place finish at the 2009 Norwegian Championships in Nottingham for £3,585 ($5,129). This was his second year in a row playing the WSOP Main Event. 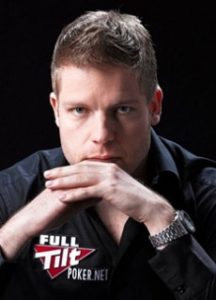 Jorryt Van Hoof will start his November play as the chip leader.(Image: highstakesdb.com)

The Dutchman is the chip leader at the final table with a stack of 38,375,000 chips and is one of the most experienced in poker at the table. He is 31 years old and hails from the Netherlands town of Eindhoven, though spends quite a bit of time in Malta.

The professional poker player focuses on cash games online and has been playing for approximately 10 years. He runs a poker training site called NederPoker and was once a Full Tilt Poker Red Pro.

Jorryt does have tournament experience but had a strong urge to play this year’s WSOP Main Event. He has final tabled events like the 2005 World Heads-Up Poker Championship in Barcelona and Master Classics of Poker in Amsterdam, and he recently won an event at the 2013 Utrecht Series of Poker for €32,305 ($42,891).

Mark Newhouse has 26 million chips going to the Main Event final table, third of the overall nine players. And he has been there before, though with less chips, as he made the November Nine last year and finished in ninth place. The 29-year-old is from Chapel Hill, North Carolina.

He is arguably one of the most accomplished professional poker players at the table and trails in lifetime earnings only to Martin Jacobson. He has also seen the highs and lows of poker, the latter admittedly happening due to poor money management and bad decisions.

Mark’s biggest live poker tournament score came in 2006, near the beginning of his live career, when he won the World Poker Tour Borgata Poker Open Main Event in Atlantic City for $1,519,200. His second biggest finish was at last year’s Main Event, and he vows he will do better this year.

Hailing from San Vlato, Spain, and now living in London, Andoni has 22.55 million chips at the WSOP final table, fourth on the leaderboard. He is the first Spanish player to make the Main Event finale since Carlos Mortensen in 2001, when “The Matador” won it.

The youngest player at the table has been playing online poker since he was 18 years old. The online pro has two PokerStars SCOOP titles to his credit.

The Flemington, New Jersey, professional poker player named William Tonking holds 15.05 million chips at the final table and seventh position on the nine-player leaderboard. He is 27 years old and a graduate of the University of South Carolina.

The East Coaster has made his living in cash game poker for several years, playing online when possible and live at casinos in Atlantic City and other nearby cities. He plays tournaments occasionally.

He has not yet won a live tournament but has final tabled events at the Borgata Poker Open and Sands Bethlehem Deepstack Extravaganza. The latter was where he captured his highest payout prior to this WSOP Main Event, winning $28K for fifth place in that $2,500 NLHE tournament.

The 30-year-old poker professional named Dan Sindelar heads to the final table with 21.2 million chips, fifth place of the nine stacks. He hails from Columbus, Nebraska, but moved to Las Vegas about six years ago to play poker on a full-time basis.

He is one of the most experienced poker pros in this November Nine, having focused mainly on live cash games throughout his career, though online poker cash games were lucrative before Black Friday.

Dan has one tournament win to date in an event at the Fall Poker Classic in Shakopee in 2007, where the $1K buy-in Main Event netted him $105,312 in winnings. He has cashed in WPT events and 16 WSOP events prior to this Main Event. Having come close to a final table in WSOP events but never anything like this, the pro may ask advice from some of his many professional poker playing friends. 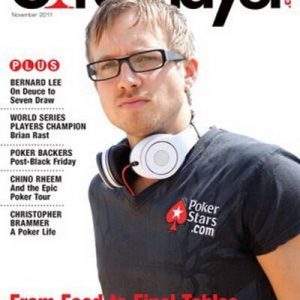 This isn’t Swedish pro Martin Jacobson’s first rodeo: he graced the cover of Cardplayer back in November 2011. (Image: cardplayer.com)

Martin Jacobson is likely the most well-known poker pro in the November Nine. Despite having been the chip leader at various points in the tournament, he has only 14.9 million chips for the final table, second to last in the counts.

The 27-year-old professional player hails from Stockholm, Sweden, but now lives in London. He makes a living playing online poker as well as live tournaments and had amassed more than $4.6 million in live earnings alone prior to this Main Event.

Martin is known as a high-roller but has tournament wins and final tables in various buy-in events. He won tournaments in series like the EPT Vienna and EPT/UKIPT London, and just missed wins at EPT Budapest, WPT Venice, and EPT Berlin. Martin has final tabled events at the WSOP as well, his biggest finish being in the 2013 $111,111 One Drop High Roller where sixth place was worth $807,427.

The short stack at the final table, Bruno has only 12,125,000 chips but already made history as the first Brazilian to ever make the WSOP Main Event final table. The 31-year-old from Fortaleza, Caera, has possibly the loudest and most excited rail of support of nine players.

Poker is a hobby for Politano as it is for many Brazilians, as the game is extremely popular there. His love of video games in his youth and poker as an adult give him the energy to play in his free time.

Bruno has finished strong in several tournaments, final tabling events on the Latin American Poker Tour and at the Brazilian Series of Poker. His best finish prior to this WSOP Main Event was third place at the 2013 BSOP Main Event in 2013 for the equivalent of $47,493 in winnings.