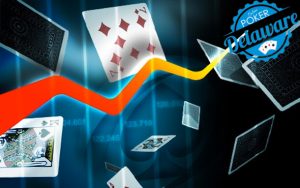 Delaware online poker revenue has been on a massive decline since March of 2014, but found some reprieve in the July intake numbers. The Delaware Lottery revealed its unaudited net proceeds from Internet gaming for the month of July, and despite an overall drop in online gaming, poker increased for the first time in months.

While the three racinos that offer online gaming in Delaware never expected a windfall of profit from the games, the numbers have been even lower than predicted. The state actually signed a liquidity compact with Nevada earlier in 2014, but it has yet to take shape. With implementation of some shared liquidity waiting in the wings and no compact in the works with New Jersey, Delaware remains on its own.

When you’re counting cents, it can’t be good.

Most online poker sites experience a seasonal decline in the summer month, as players spend more time away from computers for live poker, vacations, and outdoor activities. The drop for Delaware online poker is worse than the usual decline experienced by other sites, however.

Each month, several hundred more players open accounts on the sites offered by Harrington Raceway, Dover Downs, and Delaware Park. In July, there were 410 new registrations, just barely up from 399 in June and 342 in May.

Table games continue to bring in the most revenue for the Delaware Lottery by a wide margin, with video lottery in second and online poker in third. In July alone, table games were responsible for more than $97K of the $173K revenue. That has changed drastically from the sites’ inception, which saw online poker as the main source of revenue for the first four months. Table games took over in March 2014 and continued to grow from that point forward.

Of the three sites, Delaware Park continues to attract the vast majority of Internet gaming business with $113,243.95 of the overall revenue. Dover Downs stays in second with $43,363.84, and Harrington Raceway brought in $16,488.61. All three sites dipped from the previous month for all gaming, and all three saw an increase in online poker from June.