No More Gold for Defending Champ Qui Nguyen at WSOP 2017 Main Event, as Summer’s Last Tourney, Little One for One Drop, Kicks Off

The 2017 World Series of Poker Main Event continued on Tuesday with Day 2 action in both Flights A and B, which played out separately inside the Rio in Las Vegas. And the final non-Main Event tournament of the summer, the $1,111 Little One for One Drop, kicked off as well. 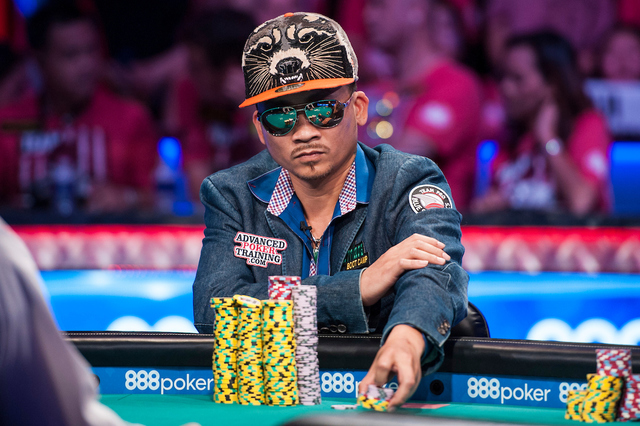 The surviving players from the Day 1A and 1B starting flights returned on Tuesday to play five more 120-minute levels. By the end of the night, 1,023 players remained, with just two of them bagging over 600,000. Lawrence Bayley finished as the Flight B chip leader with 618,000, while Mickey Craft wasn’t far behind as the Flight A with 608,100.

“I got paid when I had nice hands basically,” Bayley told WSOP officials at the end of the night. “The structure is so amazing and I just look forward to idealizing my stack. I play deep a lot these days, and I just have to keep finding the right spots and make the most out of it.”

Of course, not everyone was fortunate enough to make it through. Among those to fall were Gaelle Baumann, who had famously eliminated Vanessa Selbst in a huge hand on Day 1B, and former champs Robert Varkonyi, Martin Jacobson and Jonathan Duhamel. They were joined on the rail by the likes of Ole Scheion, Layne Flack, and Jessica Dawley.

Another player to exit was defending Main Event champ of 2016, Qui Nguyen. His title defense came to an end in Level 7 (400/800/100) when he was all in on the turn with the board reading 10♠K♠7♣8♣. There was around 84,000 in the pot and Nguyen was ahead with his K♣Q♥, though his opponent, James Akenhead, was drawing live with the Q♠7♠. The J♠ river gave Akenhead a flush, and Nguyen headed to the rail.

“Poker is cruel, but only sometimes,” Nguyen told ESPN after his bustout. “Even if you play well, if you don’t get any luck, there’s nothing you can do. Everyone needs the luck to win. Even me.”

The first of three starting flights in Event #74: The Little One for One Drop, attracted 687 entries. But after ten levels of play, only 117 remained, with WSOP bracelet winner Ken “Teach” Aldridge and his stack of 199,000 leading the way.

Among those to fall in the unlimited re-entry event were actor James Woods, Sorel Mizzi Michael Gagliano, and Player of the Year contenders John Monnette, Chris Ferguson, and John Racener.

The surviving players will return at 2 pm PT on Friday, while Days 1B and 1C will take place at 3 pm PT on Wednesday and Thursday, respectively.

On Wednesday, Day 2C of the WSOP Main Event will get underway at noon PT. Those who survive five more levels will then return for Day 3 action on Thursday, which will mark the first time this season the entire Main Event field will be playing at the same time under one roof.