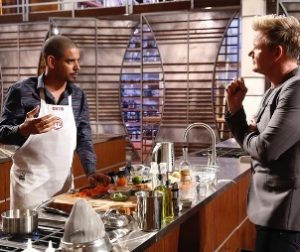 Poker pro David Williams moved another step closer to winning the MasterChef title recently after cooking up a storm for Gordon Ramsey.

Williams announced back in May that he’d be taking part in the cooking show, but told the Las Vegas Review-Journal that banking the top prize isn’t his motivation.

With more than $8.6 million in tournament earnings and a cash game career spanning more than a decade, the $250,000 prize won’t change his life although he admitted it would be nice to win.

“The money matters to me. Obviously if I win, it would be great. But you’re right, that is zero motivation for me to win,” Williams told the Review-Journal.

Despite the money not meaning much, Williams is competitive by nature and through a combination of YouTube videos and practice he managed to build up enough of a repertoire to impress at the auditions.

Once he was through to the main show, his poker training kicked in and he went on to explain that the pressure of the show wasn’t something that fazed him.

“I’ve been in so many high-stress, high-value situations. I’ve been playing for millions of dollars under the lights many times. I’ve kind of got nerves of steel. Not to brag, but pressure doesn’t get to me,” William continued.

That ability to remain calm under pressure certainly proved useful during the latest episode of the show as Williams had to literally save his team’s bacon.

With Ramsey prepped to judge the team’s piece of pork, Williams’ quick thinking saw him slice off the burned bits before the English chef had a chance to launch into one of his trademark tirades.

That move sealed the deal for the Blue Team and meant Williams was able to survive the chop for another week.

Being a prerecorded show only Williams and those involved know the outcome, but if he wins it will make him the most successful poker player to appear on a reality TV show.

Over the last few years there have been numerous instances of poker pros appearing on our screens doing something other than betting, but so far none have tasted victory.

Jean-Robert Bellande certainly made a name for himself when he appeared on Survivor back in 2007, but it was Vanessa Rousso who made the deepest run on a reality show back in 2015.

After earning a place in the US version of Big Brother, Rousso quickly became one of the favorites after she used her poker skills to manipulate her housemates.

Unfortunately, after making it through to the final, she eventually finished third but still managed to leave the house to a wave of congratulations.

Although Williams still has a way to go before he can surpass Rousso’s finish, his latest performance certainly puts him in a strong position heading into the next episode of MasterChef.

as much as I hate Annie Duke, she placed 2nd in Celebrity Apprentice – so she currently holds title for farthest in a reality comp

Yeah but Annie Duke didn’t represent the poker community in a good light as a poker player. No different than her brother Howard Lederer known for his scandal at Full Tilt who he was founder. Pretended not to know what was going on with all the players money, ruining a lot of families and lives. Also Annie Duke (Ultimate Bet) scandal.

thank you for the well written article. good peas and carrots. cause a stew don’t taste good w/o a bunch of little different stuff.