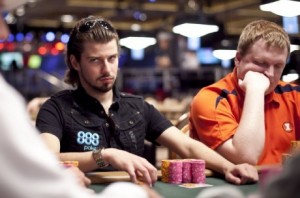 UK poker player Darren Woods, the former 888.com sponsored pro and 2011 WSOP bracelet winner, is currently on trial in Sheffield Crown Court, facing 12 charges of fraud. The charges relate to his online poker activity on multiple accounts between 2007 and 2012.

His father, Morteza Gharoon, was also charged with participation on four counts of fraud, as well as engaging in money-laundering through credit billings on behalf of his son. Both deny the charges.

Woods was “outed” as a scammer on the TwoPlusTwo forums in 2011, just months after he won his bracelet in Las Vegas. A poster called “feruell” accused Woods of colluding against him and a group of high-stakes limit hold’em players on 888.com during August 2011.

According to the accusations, Woods, playing under the moniker “Dooshcom,” colluded with another account “Benkaremail,” in order to win “several hundreds of thousands” playing short-stacked limit games.

The group presented their findings to the 888.com fraud investigations team, and to PokerStrategy.com, for whom Woods worked as a coach, and, of course, to the TwoPlusTwo forums who pored over hand histories and analyzed evidence. The consensus from TwoPlusTwo was that while evidence based on statistical probability can only ever be circumstantial, it appeared to be pretty damning.

Meanwhile, 888 posted in the thread that an investigation was ongoing, and that the suspect’s accounts had been frozen. Months passed with no word, and then PokerStrategy announced that 888 had contacted the site to say that the matter was now in the hands of the British police. PokerStrategy fired Woods, but now that a criminal investigation was ongoing, 888 was unable to comment, and the group of players who had allegedly been cheated were left in the dark.

That was, until last week, when the account of the court case, which is ongoing, was reported in the northern English local paper the Grimsby Telegraph. Since the Telegraph was the only media outlet picking up on the story, details are a bit vague, but it seems that Woods is primarily on trial for identity fraud and scamming the affiliate marketing schemes of various Internet poker rooms.

Will Players Be Refunded?

It’s alleged by the prosecution that Woods used other people’s identities to claim £147,266 ($238,149) from these sites in affiliate commission for himself. Other than 888, the Irish online poker room Boylepoker.com has been mentioned as another site defrauded.

It’s not yet known, however, whether the actual act of collusion against the 888 players forms part of the charges. If this is the case, not only would it mean those players might at last get their money back, but it would also represent the first time in the UK a player has been criminally prosecuted for cheating at online poker.

It has been illegal to cheat at poker in the UK since 2005, but the new Gambling Act has increased the possible maximum sentence from two to ten years in prison. While a prosecution for online poker cheating has yet to occur in the UK, it has happened in Sweden. In 2013, several people were tried for fraud and running an online bot operation.