Poker amateur Paul Petraglia joined the exclusive World Poker Tour Champions Club after taking down the $5,000 buy-in WPT Bestbet Bounty Scramble in Jacksonville, Florida, for $315,723. The underdog with no other large tournament scores in his career disappointed Sam Panzica and Darren Elias, two players who made the final table with historic records in their sights. 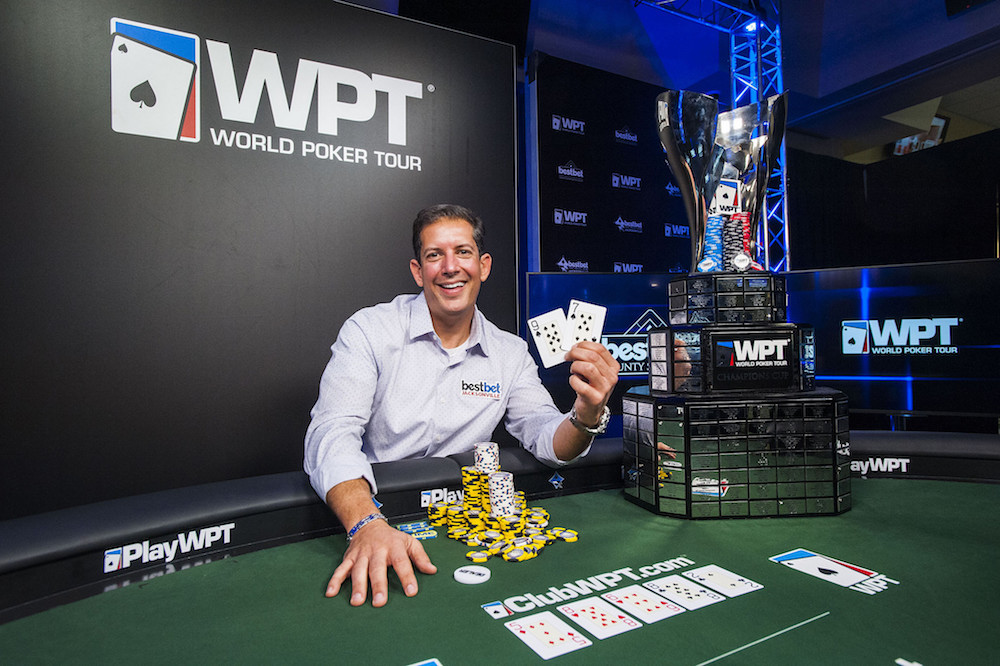 Petraglia’s tournament resume, prior to this event, includes 13 cashes for less than $1,000, and a $3,130 score in a WPT Deepstacks event in March.

When Day Four began on Wednesday, with six players remaining, Petraglia was 3rd in chips, behind Elias and another accomplished tournament pro, John Esposito, who wouldn’t last long before going out in fourth place.

When three-handed play began, Petraglia, a corporate pilot by profession, was up against chip leader Elias and Panzica, the defending champion. Those two players have combined for 5 WPT titles and nearly $8 million in live tournament winnings.

But beyond experience, Elias was fighting to become the winningest player in WPT history. And three-handed, he held a relatively massive (4-to-1) chip lead. If he could hold on, he would become the first and only four-time WPT winner.

Any such dreams would quickly fade after losing a few hands and not finding the cards to help him bounce back. Like that, he was out in third place. (Elias didn’t break a record on Wednesday, but he did make history by tying Phil Ivey for the most final table appearances in WPT history, with this being his ninth).

But Panzica still had something more than money to play for, too. Having won two WPT titles last year, including this one, he was attempting to join the exclusive club of three-time WPT champions, a fraternity that includes Elias, Gus Hansen, Carlos Mortenson, and Anthony Zinni.

Petraglia had a slight chip lead over his fellow Floridian Panzica when heads-up play began. He played his stack aggressively, raising often pre-flop and taking down some pots with a simple continuation bet when the flop probably missed both players.

After 23 hands heads-up, Petraglia had slightly increased his chip lead, but both players still seemed to be looking, and waiting, for a big hand with which to double-up or go home.

And that’s when Panzica began to take over, particularly after he won a massive pot by rivering a flush to crack trips, and taking a better than 4-to-1 chip lead.

But Petraglia battled back, taking down a few pots pre-flop. But all it took was Panzica’s playing back to push his opponent off those pre-flop raises to quickly regain the chip lead, and eventually a 4-to-1 edge of his own.

On the 64th hand heads-up, Petraglia finally got the double-up he needed to close the gap. On the next hand, he caught Panzica bluffing on the river with eight-high, and inched even closer. A few hands later, he took over the chip lead.

Panzica l never regained his edge. Petraglia took over the match, winning pot after pot before flopping the nut straight against a flush draw on the 96th hand of heads-up play.

Both players got it all-in on the flop, and Panzica was unable to find a heart on the turn or river and finally was eliminated in 2nd place.

On winning his first major tournament, in his hometown of Jacksonville, Florida, no less, Petraglia described the outcome was “almost surreal.”