Darren Elias is in a league of his own. The New Jersey native scooped the $10,000 buy-in WPT Bobby Baldwin Classic to become the first four-time World Poker Tour champion in history, thanks in part to a sick suckout that cost former WSOP Main Event champion Joe McKeehen the WPT Player of the Year title, which was music to Art Papazyan’s ears. 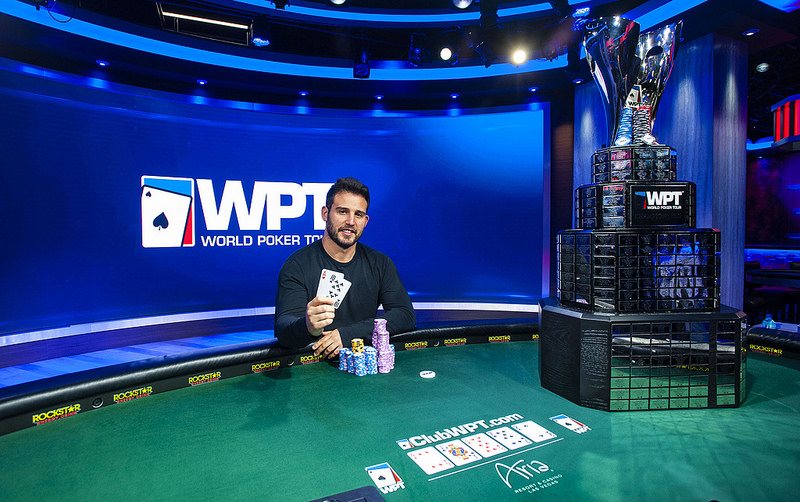 Wednesday’s final table, which aired on a 30-minute delay from the new PokerGo studio outside Aria in Las Vegas, was the final event of Season XVI, and it proved to be full of intriguing story lines. The cast of characters delivered an arguable masterpiece — one of the most exciting days in WPT history, at least as far as I can remember.

Three of the six players at the final table were chasing history and another was seeking a WPT Player of the Year title.

Papazyan, who won a pair of WPT titles during the season, had the biggest sweat of all on Wednesday, and he wasn’t even competing. The Los Angeles-area grinder and regular on “Live at the Bike” high stakes cash games finished Season XVI with 2,450 POY points. It was enough for the lead, but McKeehen could’ve passed him with a runner-up or better finish in the final event to swipe the title away.

But as things happen in poker, it didn’t work out that way.

Two Bad Beats in One Hand

Elias held a massive chip lead throughout most of the final table, but the former WSOP champion had finally closed the gap when three-handed play began. McKeehen showed poker fans how he won the WSOP in 2015 on Wednesday.

He was aggressive and played fearless, if not flawless, poker. And he was about to be rewarded with a huge chip lead and be all but guaranteed to win POY. Or, was he?

That deuce on the flop was all it took to eliminate McKeehen in 3rd place ($178,610), and for a double bad-beat, it also gave Papazyan the POY win, with 100 more points than McKeehen for the season.

Prior to the former world champ’s elimination, Jonathan Little was looking to become become just the sixth three-time WPT champion. Instead, he was the first to bust on Wednesday, going out in  6th place ($74,520).

Dietrich Fast, who now has more than $6.8 million in lifetime tournament winnings, was the next to head to the exits after having his pocket aces cracked by Kuo’s nut flush.

After McKeehen suffered his sick bad beat, all eyes were on Elias as he sought to make history and Kuo who desperately wanted to win her first WPT title.

Things didn’t go so well early in the heads-up match for Kuo as she quickly dipped below 500,000 chips, barely more than 10 percent of Elias’ stack.

But she battled back and, at one point, nearly evened up the match on a double-up with pocket kings. Unfortunately, for the Taiwanese pro, the bit of run good didn’t last long. Immediately after doubling up his opponent, Elias went back to work, winning pot after pot and, within 30 minutes, had regained better than a 2-1 chip advantage.

On the 104thhand of heads-up play, more than three hours into the grueling match, Elias got Kuo all-in pre-flop with a bigger ace and his hand held up to finish off the tournament.

With this victory, Elias becomes the first four-time WPT champion and $387,580 richer. Kuo will have to wait for another day to win her first WPT event, but she didn’t go home empty-handed, receiving a $248,380 payday, her largest score ever.

Darren Elias is the only four-time WPT champion. The list of players chasing him with three victories is short: Carlos Mortensen, Gus Hansen, Chino Rheem, and Anthony Zinno.

As part of becoming Player of the Year, Elias also receives an entry into the season-ending Tournament of Champions, which begins on Thursday at Aria. The event is only open to current season and past WPT champions. Daniel Negreanu, Howard Lederer, Anthony Zinno, and Faraz Jaka, are among the 15 past winners expected to play.

Congratulations to Darren Elias becomes the first four times champion of the WPT, had eliminated Joe McKeehen aspiring player of the year being this in third place. He was very lucky since three of the six players at the final table were chasing the story and another was looking for a WPT Player of the Year title.