“High Stakes Poker,” which aired on Game Show Network during the height of the poker boom era, was one of the most popular poker shows ever. But what was it that made it must-watch TV for all types of poker fans? Was it the personalities at the table, the commentary, or the high stakes action? Daniel Negreanu polled his Twitter followers and we have an unscientific but telling answer. 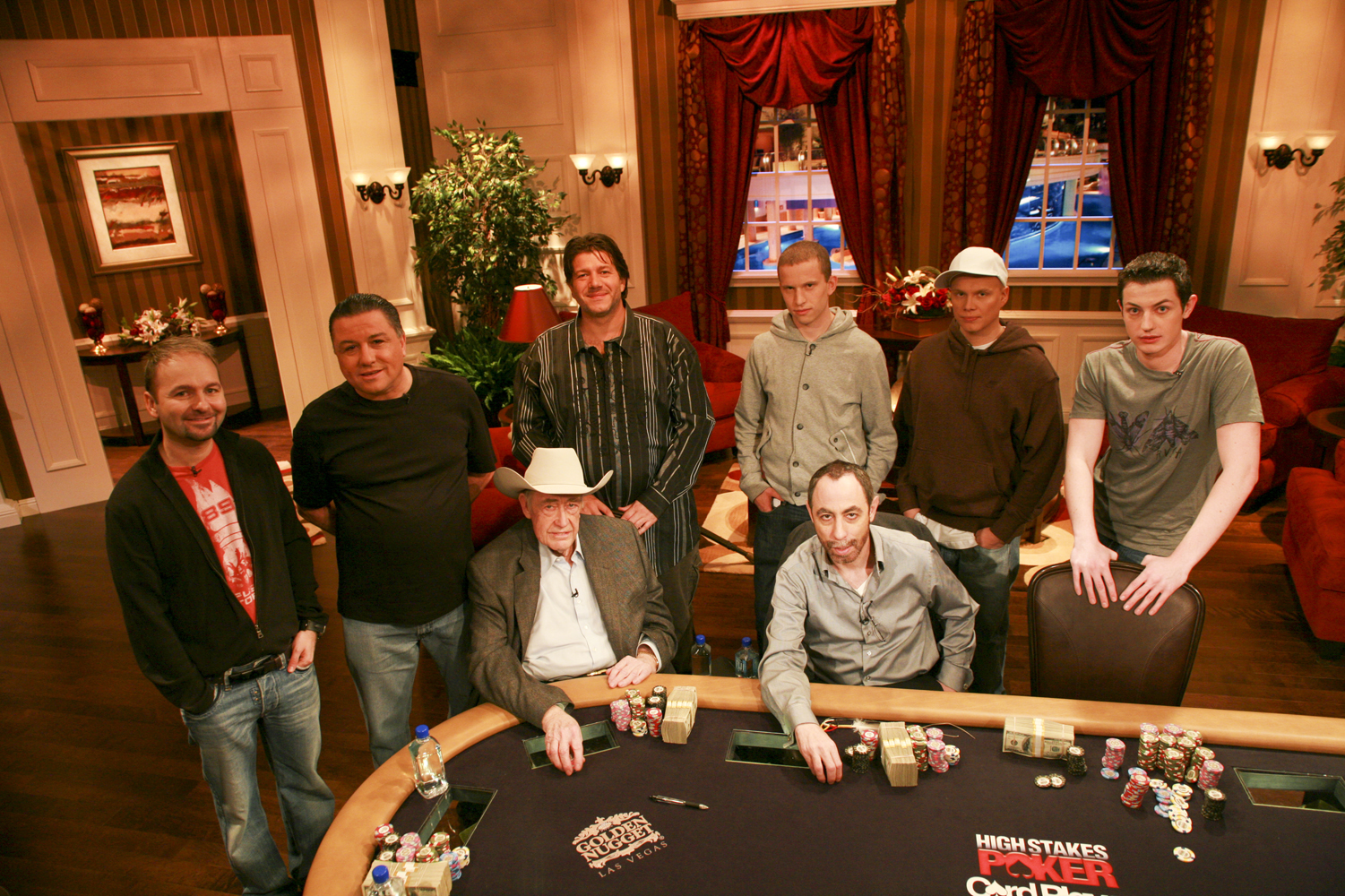 Was there a better poker show than “High Stakes Poker?” (Image: gsn.com)

“High Stakes Poker” was one of the first televised high stakes cash game shows. Many of the top players from a decade ago such as Negreanu, Tom Dwan, and Doyle Brunson clashed on the felt in some of the most memorable televised pots of all-time, like when Gus Hansen turned quads to crack Negreanu’s better flopped set in a $575,000 pot.

So, what made this show so much more intriguing than other TV poker shows? I think I have a pretty good read on what the fans enjoyed most. And that answer could give us some insight into how we can improve TV poker in the future.

A couple of weeks ago, Daniel Negreanu and Matt Berkey engaged in a pleasantly civil Twitter debate about what makes for quality poker on television or live-stream. It was a breath of fresh air to read a mature debate on social media on any topic. Now, if only we could get the same sort of banter between Trump supporters and the anti-Trump crowd. Yeah, right.

Negreanu argues that poker fans tune in more for the personalities than the commentary or to learn how to play fundamentally sound poker. Berkey doesn’t dismiss Kid Poker’s argument completely, although he feels the current high rollers who lack personality are entertaining and that casual fans will still tune in to watch them compete.

Twitter polls aren’t scientific. Anyone can vote, even those who are clueless about the topic (much like US political elections, am I right?). And some who understand the subject matter misread the question or lack reading comprehension skills. Plus, social media isn’t always an accurate representation of society as a whole. So, it’s nearly impossible to make a definitive conclusion from a Twitter poll.

But I believe I can make some reasonable assumptions based on Daniel’s recent poll for one reason.

For those of you who loved to watch High Stakes Poker on GSN, what was it about the show that made you love it so much?

With more than 12,000 votes, 49 percent said “the characters” made “High Stakes Poker” enjoyable. That’s a large enough sample size to get an idea of what poker fans desire most from a poker show.

With that said, an “I Didn’t Watch High Stakes Poker” option should have been included in this poll. I’m guessing there were some who voted despite never having watched the show or have only seen a few clips from the show.

But given 12,000-plus people voted, enough votes to offset the trolls and dishonest voters, we have a pretty solid grasp on what made “High Stakes Poker” entertaining. If Negreanu were to poll 12,000 poker fans who all said they religiously watched the show, I’d venture to guess the results would be similar to his unscientific Twitter poll.

What am I basing that assumption on? First off, the sample size in his Twitter poll was large enough to at least give me an idea of what the real “High Stakes Poker” fans enjoyed about the show. But I also know many casual poker fans, which was always an important demographic for that show and any popular poker show. I’ve had similar discussions numerous times with friends who play and watch poker recreationally.

Without interesting characters at the table, most casual fans won’t watch. Shows such as “Poker After Dark” and “High Stakes Poker” were so successful mainly because the players made the shows exciting. It wasn’t just the commentary or the high stakes, although those factors also helped.

Taking it to the Streets

I personally asked 17 friends and colleagues who play poker for their opinion on what they enjoyed most about “High Stakes Poker.” Yes, I’m aware that’s a tiny sample size but I wanted to get a feel for what was so intriguing about the show to some poker fans.

“‘High Stakes Poker’ was a great show,” he said. “The first handful of seasons were some of the best poker TV ever. I enjoyed a mix of the commentary, the editing, the players, the stakes and how new poker was to me. Doubt I’ll ever feel the same way I did back then watching ‘High Stakes Poker,’ ‘Poker After Dark,’ WSOP, WPT, etc.”

My long-time friend Greg Wilson, who we sort of taught each other poker back in 2003, also enjoyed the commentary of Gabe Kaplan and agreed with Laplante.

“The level of play was high for its time,” he added. “I would rather watch less talented players who are entertaining than the ‘GTO bots’ of today.”

Wilson was an avid poker player during the poker boom era. But his interest in the game has dwindled over the years and he now only plays once every couple of months. He still enjoys watching poker on TV, however, but doesn’t find any use for PokerGo or to watch the high roller events. He sticks with mostly WPT and WSOP these days.

I asked another friend, Ben Abrahams, for his take on the issue. Ben, unlike Greg, still grinds the poker cash games in Las Vegas daily. So, he’s far from a recreational player or casual fan.

“I watched for the characters….Ivey, Gold, Negreanu, Farha, Hansen,” he said. “The commentary was okay. But watching Tom Dwan was great. Players back then were so much more fun to watch than the high rollers of today. Like you’ve said, Stephen Chidwick is boring.”

Ben said he also enjoyed seeing the “bricks of cash” on the tables during “High Stakes Poker” shows. And he wasn’t the only one who made that comment. Another recreational poker-playing friend of mine, Daniel Moravec, said those bricks of cash was his favorite part of the show. But he also said he’d rather watch “less talented” pros with personality on TV than boring, more talented high rollers.

“Probably more the players for me,” she said when asked what she enjoyed most about the show. “That was back when we were getting our first opportunity to see their real personalities first-hand. That was almost better than getting to watch them play. With that said, I think the commentary was great as well, giving us insight into the thought process of pros playing for high stakes.”

In total, I asked 17 poker fans with varying interest in the game. Nine said they most enjoyed the characters on “High Stakes Poker,” seven said it was a mix of Gabe Kaplan’s commentary and the players at the table, and one said he most loved seeing the bricks of cash on the felt.

What I conclude from both polls is most poker fans seemed to enjoy Kaplan’s sense of humor but players such as Mike Matusow, Daniel Negreanu, Phil Hellmuth, and Tom Dwan made “High Stakes Poker” must-watch TV.

My Take on ‘High Stakes Poker’

I’ve watched all 98 episodes of “High Stakes Poker” at least once, and probably twice. We may never see a better poker show. I too enjoyed Kaplan’s commentary along with his sidekick AJ Benza. And Mori Eskandani, Poker Hall of Famer and legendary producer, did an excellent job producing the show.

But “High Stakes Poker,” in my opinion, never would have been so entertaining without the right mix of pros and amateurs. Sammy Farha, Negreanu, Dwan, Matusow, etc. Those guys were a blast to watch. They knew how to pander to the television audience and weren’t afraid to play for big pots.

Players back then weren’t consumed with hand ranges, VPIP, or taking a long time to think about their next move. They played based on feel, made quick decisions, and GTO was a foreign language.

Sure, the “High Stakes Poker” pros were far less talented than the high rollers of today. But from my perspective, and clearly the opinion of many others based on Negreanu’s poll, they were more entertaining and made for better TV.

How Poker Can Learn from ‘High Stakes Poker’

Mori Eskandani created a near-perfect product with “High Stakes Poker” and that’s why Game Show Network kept it around for seven seasons until 2011 when the Black Friday scandal killed off the show’s main sponsors.

Since the show went off the air, along with “Poker After Dark,” high stakes cash game poker disappeared from mainstream television. And they probably aren’t coming back, at least not until online poker makes a huge comeback in the US (which is never going to happen, if I’m being honest).

But the blueprint for how to create a popular poker show is out there, thanks to “High Stakes Poker.” If producers want casual fans to watch – and why wouldn’t they – you need interesting personalities at the table. Great commentary certainly helps, but it isn’t enough alone to bring in casual fans.

It’s not that I despise watching players such as Stephen Chidwick and Fedor Holz play. Personally, I’m entertained by their incredible talents. But the poker community, with its increased focus on GTO in recent years, is scaring away the casual audience.

That’s bad for the game as a whole as it eliminates much of the fish and it also keeps poker out of the mainstream. I’ve always found it hard to believe most poker fans are more entertained by great players than intriguing characters. And Negreanu’s poll backs up my claim.

If the poker community wants future poker growth, we need the poker live-stream shows to focus more on the characters than the talent. Give us a mix of skilled players with witty banter, just like we always saw on “High Stakes Poker,” and the casual fans will come back.

Sammy Farha, Negreanu, Dwan, Matusow, and Phil Hellmuth, when he played cash games were very amusing. By far my favorite was Tom Dwan
I started out watching the British poker shows, with characters like Devilfish, they were fun to watch back in the day.