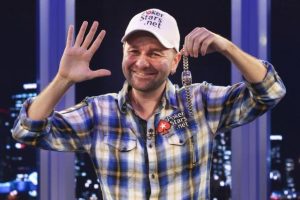 Daniel Negreanu is one of the most famous names in the poker world, which means that he can instantly add credibility to any poker project he lends his name to.

That makes him a natural fit for a burgeoning poker network looking to show nothing but poker to fans of the game around the clock.


Poker Central has announced that they will be partnering with poker superstar Daniel Negreanu, all a part of an effort by the network to diversify the kinds of content they will be able to show once they launch later this year.

“We are excited to add Daniel to the Poker Central team,” said Poker Central CEO Clint Stinchcomb. “Daniel is a great ambassador of the game and will help take televised poker to new heights.”

Poker Central Ramping Up to Launch

Poker Central has been in the works for over a year now, but has only recently been making headlines as they ramp up to their expected launch later this year. As of now, there is no exact launch date, nor is it clear where viewers will be able to get Poker Central within their cable or satellite packages, but the network says that those details will be coming in the future.

“Fans can start enjoying 24/7 poker in Q4 2015,” Stinchcomb told PokerNews earlier in April. “Our exact launch date will be announced with our distribution partners later this year.”

Negreanu, who is the winningest player in the history of live tournament poker, confirmed that he will be partnering with the network.

“I am thrilled to join the Poker Central team,” Negreanu said. “I can’t wait to help make 24/7 poker a reality.”

Negreanu also announced on Twitter that he would be playing in the Super High Roller Bowl, a $500,000 buy-in tournament scheduled to take place in Las Vegas from July 2-4 this summer.

Tournament organizers have estimated that the event will have a $25 million prize pool, and many of the top players in the world have already confirmed their participation, including Phil Hellmuth, Erik Seidel, Dan Colman and Tom Dwan.

The tournament is also expected to be one of the major early programming initiatives for Poker Central. The network will be working with POKER PROductions in order to produce a television show for the tournament.

“We are excited to partner with ARIA and POKER PROductions to announce this new and thrilling event,” Stinchcomb said. “It’s sure to be one of the most captivating and popular tournaments in poker.”

The partnerships for Poker Central aren’t likely to end with Negreanu and one major tournament. The network has suggested that they will be looking to work with other highly-visible poker pros and plan to announce more partnerships before they launch.

That said, it will be harder to snag a bigger name than Negreanu. The Canadian poker legend has nearly $30 million in tournament earnings over his career, putting him first on the all-time poker money list.

He has also won six World Series of Poker bracelets in his career, along with two World Poker Tour titles.

In recent weeks, Negreanu has also taken to producing his own poker content. His live streaming sessions on Twitch have proven very popular, including one in which he won $50,000 in a three-hour high stakes eight-game session on PokerStars.