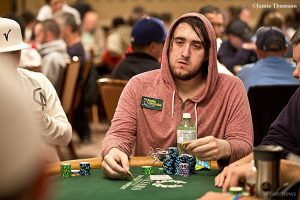 Justin “Stealthmunk” Schwartz, who would be required to adopt a holistic approach to living if he loses to Negreanu. (Image: Jamie Thompson)

Daniel Negreanu and Justin “Stealthmuck” Schwartz are, at the time of writing, almost neck and neck in the World Series of Poker Main Event.

With 27 players left at the end of Day 6, they sit ninth and tenth, respectively, each hoping to make his mark on WSOP history.

But when all that nonsense is done and dusted, there’s the small matter of a very strange heads-up match.

Negreanu has challenged Schwartz to a poker duel that comes with a completely unique proposition.

The two will play a PLO heads-up match that, for Schwartz, will essentially be a freeroll.

If he wins he will receive $100,000; if he loses he will be required to make some lifestyle changes and become a “better person.”

This will include improving his diet, taking regular exercise, doing yoga, meditating and reading widely, as well as getting involved with the Choice Center Leadership University, which offers “personal development” courses that aim to “elevate emotional intelligence.” Negreanu swears by them, and they seem to be working for him.

It all started, as so much does these days, on Twitter.

Last week, Schwartz declared himself bored of the cash game action at the Series and openly challenged “anyone” to take him on at head-up PLO at $25/$50 or higher.

Negreanu was one of the few respondents.

“He’s actually been really mean and rude to me, but I always thought for years, ‘How can I make a difference for this kid? How can I help him?'” Negreanu told PokerNews. “So I wrote back a tweet. I honestly didn’t think he was all that serious, but I said if you do the following, we will play. Then it became a thing. A lot of people came on board and told him he should do it because it’s a great opportunity for him.”

“Daniel and I have had our differences over the years,” Schwartz admitted. “We nearly got into a physical altercation at PCA once. I’ve always been the voice of the younger generation of online poker players and not afraid to speak out. He tries to speak out too, and our opinions often conflict.”

“He’s played and interacted with me enough to realize I have potential as a poker player and realize I’m a very depressed and tortured soul,” Schwartz continued. “I think his extreme success has gotten to his head. He has made millions upon millions, and the cornerstone of Choice Center is charity. What could be more charitable than giving one of your supposed enemies a chance at a new life?”

And talking of curious proposition bets involving outspoken poker players with the last name “Schwartz,” it seems Luke “_FullFlush1_” Schwartz and Sorel Mizzi are planning beating the hell out of each other in a MMA match.

The pair are discussing a bet in which they take on one another in the ring following one year’s training each.

We have no idea whether this will actually happen, but it did give us the easiest segue in the history of poker journalism, so thanks guys!