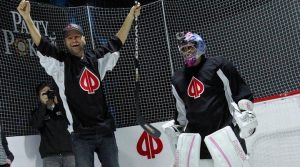 Daniel Negreanu is gearing up to help bring an NHL hockey team to the Las Vegas Strip. (Image: f5poker.com).

Poker Hall of Famer Daniel Negreanu is betting that a new NHL franchise will one day arrive in Sin City, and he recently set social media ablaze with an enthusiastic tweet on the prospect of ice hockey making the Las Vegas Strip an even cooler place to be.

“Very excited about tonight, meeting with the new ownership group looking to bring an NHL team to Las Vegas. This is happening friends!” -@RealKidPoker

The announcement trended for a while on Twitter, and was picked up by several media outlets, including Sports Illustrated and SportsNet Canada, as poker and hockey fans perked up to learn more. Daniel later tweeted positively about his discussions with the ownership group:

“Great meeting tonight with the Maloofs, Bill Foley and the other founding members. NHL is coming to Vegas #VegasWantsHockey”

Although Negreanu is clearly thrilled for pro hockey in Vegas, it is up to billionaire Bill Foley, the Maloof family (former NBA Sacramento Kings owners), and other founders to further explore the market for such a venture.

Back in December, NHL commissioner Gary Bettman indicated that the Board of Governors is fine with Foley conducting a season ticket drive to determine if enough interest exists to support a team. The ticket drive will begin on February 10, and Foley is looking to sell 10,000 tickets as evidence of a viable market for NHL expansion.

As for Negreanu’s part, he told Chris Tessaro of All In Magazine that “Right now, I’m just a founding member. We will see how that develops.” But the owners couldn’t have found a more adept spokesman for the idea, and Negreanu characteristically had much to say about the potential for Las Vegas hockey.

Prior to the owner’s group meeting, Daniel tackled several local hockey-related topics on his blog, from corruption concerns to the notion that Vegas is not (yet) a hockey town.

In further support of an expansion team, he added:

“I’m personally quite excited about the prospects of an NHL team in Las Vegas and I believe strongly that not only will we get a team, but that hockey will work in this sports starved city…the NHL needs to add two teams to the Western Conference and it appears to me that Las Vegas and Seattle are both viable options and frontrunners for a team.

For many, they wonder how it makes sense to play ice hockey in the desert, but I’m sure the same was said years ago when expansion hit sunny California and that experiment has worked quite well with thriving franchises in LA, Anaheim, and San Jose…San Jose in particular is an example of how well a team can do in a one sport town.”

If Daniel’s NHL dream is realized in Las Vegas, the Canadian-born poker sensation will still have to travel clear to New York, New York to attend a game, but of course we mean the more compact Las Vegas version of the “concrete jungle.”

At a price tag of $375 million, MGM Resorts and Anschutz Entertainment are building a 20,000-seat arena on the Strip behind the New York, New York Hotel and Casino. The sports facility is being built to NHL and NBA specs, and is slated to open its doors by spring of 2016.

If local hockey fans get their wish, Las Vegas could, in due time, offer residents and visitors some bone-jarring entertainment away from all the number-crunching at the poker tables. Without a doubt, avid hockey fans and especially tournament poker’s highest achiever Daniel Negreanu, will be happy to join them.