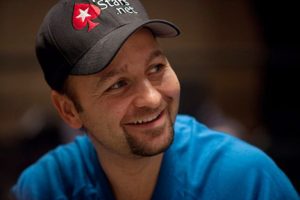 Daniel Negreanu, along with Jack McClelland, was inducted into the Poker Hall of Fame 2014 in his first year of eligibility. (Image: WSOP)

Daniel Negreanu and Jack McClelland have been announced as the Poker Hall of Fame Class of 2014 winners. The two inductees will officially be inducted on Sunday, November 9 at Binion’s Gambling Hall in Las Vegas, the original home of the World Series of Poker in downtown Sin City, as part of the celebrations surrounding the final table of the WSOP Main Event.

In the case of Negreanu, there was virtually no doubt that his career would eventually land him in the Poker Hall of Fame. The only question in some minds was when exactly that would happen. With “Kid Poker” turning 40 just this year, this marked the first time he was eligible for induction. There was speculation that some voters might wait to induct a player who was still so young and in the prime of his career.

But that didn’t happen, and few could be surprised that the all-time money leader in tournament poker landed himself in the Poker Hall of Fame on his first opportunity. Negreanu has won nearly $29.8 million in his tournament career, which includes six WSOP bracelets and two titles on the World Poker Tour. His biggest career win came this summer, when Negreanu won over $8.2 million for his runner-up finish at the Big One for One Drop.

“It’s an honor to be inducted alongside so many great players that have come before me,” Negreanu said. “An even bigger honor to be recognized at age 40, the same age as the legend Chip Reese. Thank you to the living members of the Poker Hall of Fame and those on the Blue Ribbon Media Panel that voted for me.”

McClelland Had Long Career Behind the Scenes

While Jack McClelland may not be as well-known to poker fans, he’s had a major impact on the game for nearly as long as Negreanu has been alive. The 63-year-old has held virtually every important position in a poker room during his illustrious career, and was the tournament director for the WSOP in the 1980s. He would later run the Bellagio poker room in Las Vegas from 2002-2013. Throughout his career, McClelland has been critical in the spread of tournament poker around the world.

“Being inducted into the Class of 2014 Poker Hall of Fame is a very exciting prospect and I am sure it will be a very humbling experience,” McClelland said. “I think everyone involved in this process and to the WSOP, WPT and all of the great people I have met and the wonderful people I have worked with throughout the years. Thank you for bestowing this honor upon me.”

Negreanu and McClelland were inducted from a group of finalists that included luminaries such as Ted Forrest, Huck Seed, Humberto Brenes, Jennifer Harman and Mike Matusow. After their official inductions, the two men will become the 47th and 48th members of the Poker Hall of Fame.

Congrats to them both. Both uber worthy!