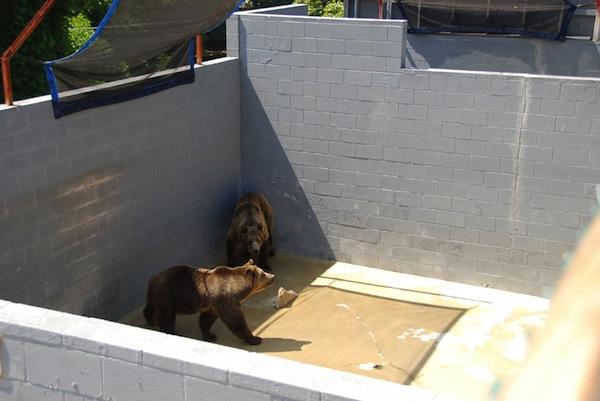 Daniel Negreanu, a longtime PETA supporter, has joined the organization in asking for Harrah’s Cherokee bear zoo in North Carolina to be closed, citing bad conditions for the animals. (Image: peta.org).

Daniel Negreanu has written to Senior Vice President of Harrah’s Cherokee Casino Brooks Robinson asking him to join the campaign to shut down the Cherokee Bear Zoo’s “concrete prison” in North Carolina.

The zoo is located in Cherokee, less than a mile from the casino where Negreanu finished in sixth place at the WSOP National Championship earlier this year.

Negreanu, a long-time vegan and PETA member who has called the meat industry an “animal holocaust,” wants Robinson to talk to the new principal chief of the Eastern Band of Cherokee Indians Patrick Lambert, and ask him to close the pits and retire the bears to a sanctuary.

“These bears are kept in horrendous conditions in barren concrete pits that prevent them from engaging in virtually any type of natural behavior,” Negreanu writes. “Bears in the wild explore home ranges of up to thousands of miles and are active for up to 18 hours a day, roaming, foraging, and exploring.

“Bears at the CBZ are confined to barren concrete pits in which they spend much of their time pacing back and forth and spinning in circles, signs of profound deprivation.”

“The controversy surrounding the bear pits has tarnished Cherokee’s reputation for years,” states Negreanu, who suggests that the casino might benefit from the closure of the zoo, as tourists would visit the casino instead.

“A life on concrete wreaks havoc on bears’ bodies and can lead to burned pads, debilitating arthritis, and ulcers, among many other serious conditions,” said Negreanu.

The zoo is currently facing a lawsuit filed by two elders of the Eastern Band of Cherokee Indians alleging that the concrete pits violate the Endangered Species Act which prohibits the harming of grizzly bears.

Negreanu was one of many celebrities who signed up to PETA’s “Pledge to Go Vegan” campaign earlier this year, along with the likes of Woody Harrelson, Joaquin Phoenix, Richard Linklater, Peter Dinklage and Paul McCartney.

The poker player became a vegan nine years ago, he says, following the revelation that fellow poker players “eat piles of crap around the table, like mounds of dead animals every hour.”

Of course, PETA itself has been on the receiving end of plenty of criticism over its own treatment of animals, not least when it emerged in 2009 that the organization destroyed 96 percent of all pets handed into its American headquarters, whether they were healthy or not.

The preceding year, PETA killed 2,124 of the 2,216 animals it took in to its Norfolk, Virginia branch, with just seven being rehomed. The organization claimed they could not find any takers for the pets and that they were better off dead, but many No Kill shelters around the country might beg to differ.