With people recently empowered to share their stories about being victims of sexual misconduct, it should come as no surprise that the poker world isn’t immune from revelations about disgraceful behavior. Semi-retired actor and poker regular James Woods found himself (again) in the crosshairs this week after actress Emily Perkins named him as an abuser, which sparked a Twitter fight with Daniel Negreanu that included threats of physical confrontation and taunts about legal action. 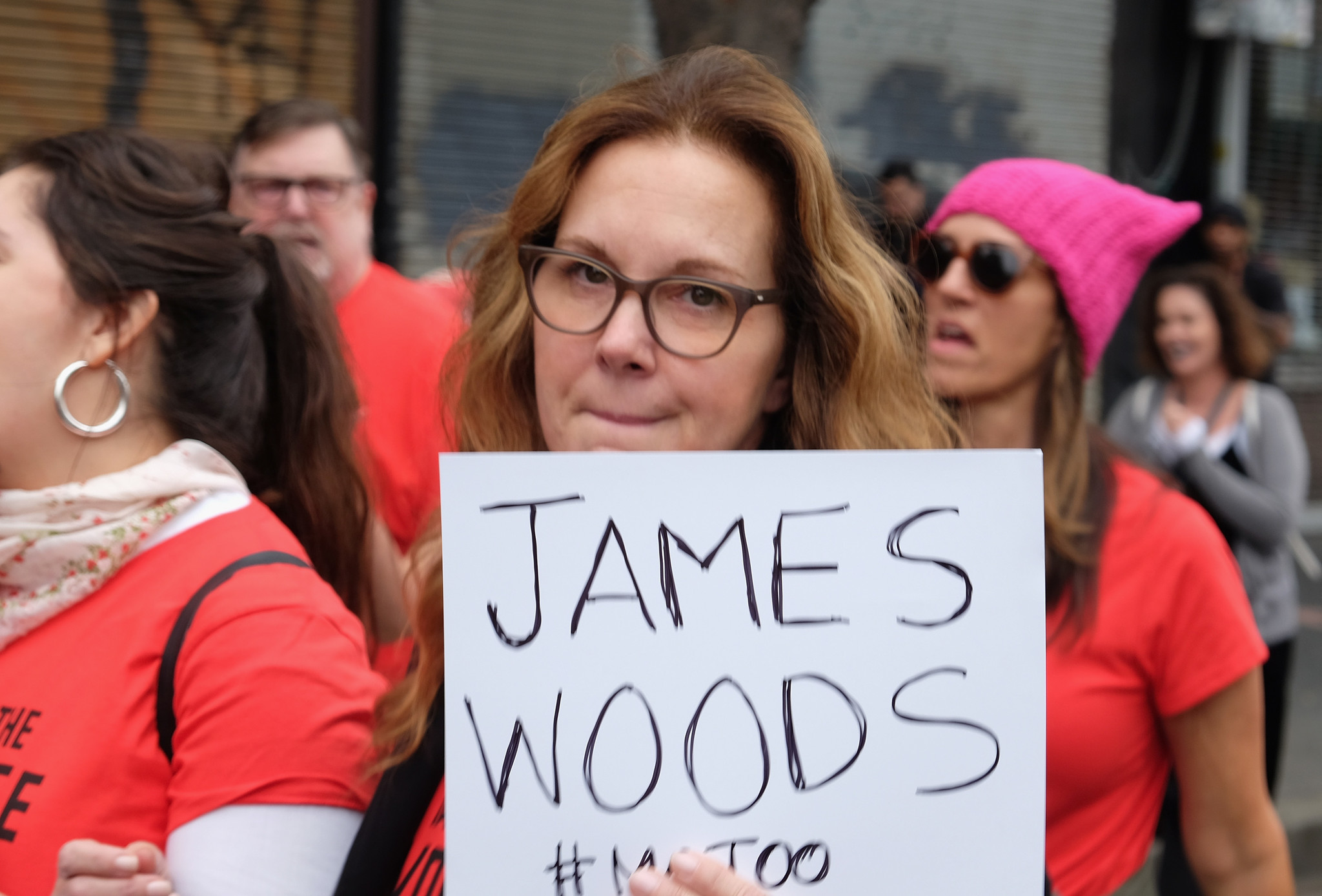 Perkins was one of several hundred people participating in a #MeToo march in Hollywood on Sunday, and she carried a sign naming and shaming the outspoken poker-playing actor and conservative firebrand.

Perkins, a star in films such as “The Flintstones” and “Miracle on 34th Street,” did not give any further details about her claim. She is the second actress, however, to call out Woods for inappropriate behavior, as “General Hospital” actress Amber Tamblyn, now 34, has accused Woods of pursuing her when she was 16.

Woods had been publicly silent about Perkins’ claim, but apparently couldn’t resist saying something after Negreanu brought the latest allegations into the poker Twitter fray.

“Add James Woods to the list of men accused of chasing 16 year old girls,” @RealKidPoker tweeted, with a link to a story in the British tabloid the Daily Mail. “He appears to have a lot in common with Roy Moore. What is wrong with these people? Disgusting. Do I believe these women? 1000% yes.”

Woods wasn’t going to just sit back and let the PokerStars Team Pro walk all over him. He fired back with what some might considered a threat:

@RealJamesWoods: Say it like a man to my face, you cowardly piece of sh*t. Say it as a statement of fact, so if you have any money left, you might actually be worth suing, unlike these other losers with no money and big mouths. And how old was Evelyn Ng when you were her “mentor,” you hypocrite?

Perhaps Woods might have fared better if this exchange had occurred before Twitter gave all tweeters more than 140 characters. Because while it’s well known that Negreanu and Ng dated when she was 16, he was only 17 (or at most 18) at the time, as the two Canadians are only 14 months apart in age.

That’s a bit different than Woods’ case with Tamblyn, who alleges she was just a teenager fending off advances from a then-53-year-old man.

Tamblyn went public with her distaste for the poker playing actor in September, writing an open letter about the incident, and tweeting, “James Woods tried to pick me and my friend up at a restaurant once. He wanted to take us to Vegas. ‘I’m 16’ I said. ‘Even better’ he said.”

Negreanu later called the star of the hit 1990s flick “Casino” a “hot piece of garbage,” and referred to Woods as “quite a scumbag” for a “pattern of dating teens as an old creepy dude.”

When asked by one of his followers why he even bothers responding to “idiots” like Negreanu, Woods answered that he “already scraped him off my shoe.”

If the nature of the allegations weren’t so serious, we might say get the popcorn next time the Negreanu and Woods find themselves at a WSOP feature table.

Woods is just one of many notable personalities to face recent allegations of sexual misconduct. Numerous Hollywood performer and executives have recently been outed as alleged sexual predators, including movie mogul Harvey Weinstein, actor Kevin Spacey, and comedian Louis CK.

Woods, however, is not the only person recognizable from poker to be caught up in the current purge of disgraced Hollywood personalities. Danny Masterson, star of “That 70s Show” and a former regular on Bravo’s “Celebrity Poker Showdown” in the early poker boom days, is facing multiple criminal allegations of sexual assault.

And on Thursday, former hostess of “Poker After Dark” Leeann Tweeden revealed that she was inappropriately kissed and groped by Sen. Al Franken shortly before he was elected to office in 2006. These claims already have sparked calls for a Congressional ethics investigation.

It is a shame to find out that people in the spotlight who I liked are actually scum. But james woods has been scum in my eyes for a long time now, so this is not surprising.

I have to lmao at anyone who posts the “I will kick you ass when I see you” crap in the net.

In this case, James Woods will run into him somewhere in the poker world, the threat is not an empty one.

Most assuredly Daniels indiscretion is nothing near like James Woods. Having a relationship with a girl 14 months younger than you is NOT being a predator. James woods is accused of being a predator by Perkins. Daniel was right to say it’s disgusting. IT IS!

Sixteen year olds have not learned enough of the ways of the world to make these kinds of judgement calls asked of them by 30,40 ,50 year old men. She never says wethe she acted on it and went, so I hole it ended there. Guys are scumbags for asking children to participate on an adult level with them and they are criminal if it goes farther.

do we have bets on who wins the fist fight? …….if and when?