Daniel Negreanu has a bet with Ben Lamb that he’ll win three bracelets this summer. On Friday, he could have one-third of that goal completed. 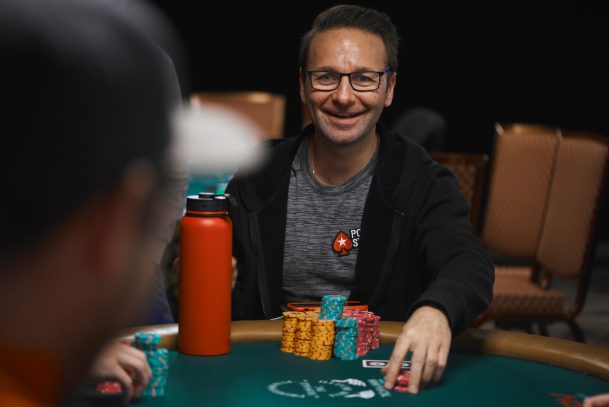 That “little bit” of money isn’t what Negreanu is after. He’s the all-time winningest live tournament player in history, having surpassed the $33 million mark earlier this year. But, like Jason Mercier in 2016, his sights are set on acquiring three bracelets.

Team Negreanu enters Day Three with 1,498,000 chips. Its nearest competitors, a group composed of Anthony Ajlouny, David Fong, and Mike McClain, sits in 2nd place  with 932,000. Right behind them, with 929,000 chips, are Liv Boeree and Igor Kurganov.

The final day for Event #2 begins at 2 pm Pacific Time on Friday. We’ll be playing down to a winner.

The $565 buy-in Casino Employees event doesn’t garner as much attention as it should, given that only industry insiders are allowed to play, making for some interesting action. It’s the first tournament of the season and the coveted gold bracelet went to Brian Hollis.

Hollis bested a field of 651 casino employees from around the world. His first career World Series of Poker victory was worth $68,817, a decent annual salary won after just two days of “work.” The Maryland resident had never cashed in a WSOP tournament until now. In fact, this was the first time he’d even made it past the first break in a series event.

Hollis came out to Las Vegas for this tournament and the Colossus, another $565 buy-in event, which begins on Friday. He scooped the bracelet with top pair after catching his opponent Chris Solomon, a poker dealer at the Flamingo in Las Vegas, bluffing with 10-high.

Shootout at the Rio

Event #3, the $3,000 Shootout No-Limit Hold’em, got underway on Thursday as well. This is a unique tournament. Players aren’t just competing against the entire field. They must win their table by accumulating all of the chips to advance to the next round.

Day One had 369 entries and played down to 50 players. All remaining bracelet hopefuls are now guaranteed at least $6,407, more than doubling their money.

Day Two will start with 10 tables of five players. Only those who win their Friday table will earn additional money. The final 10 finishers will come back on Saturday to battle it out for the bracelet and $229,923.

There are many big-name pros left in the field in this one. Matt Glantz, Barry Greenstein, Olivier Busquet, Dominik Nitsche, Andre Akkari, James Obst, Jean-Robert Bellande, and John Racener all won a table on Thursday. Skill versus luck, indeed.

Where to Watch WSOP?

Poker Central is slowly releasing its streaming schedule for the 2017 WSOP. In previous years, live streams were available on WSOP.com.

This year, poker fans must download the PokerGO app on a mobile device (fees apply) to watch. We should have a full list of live streamed tournaments available by tomorrow. Here is the current list of events to be aired on the PokerGO app.

There’s a big weekend ahead at the Rio. Event #4, the $1,500 Omaha Hi-Lo 8 or Better Day Two starts at 2 pm PT. Rex Clinkscales, a Team Cardschat member, leads after Day One.

Colossus III kicks off on Friday. The $565 buy-in tournament will likely have more than 20,000 entries. There are two Day One starting flights today and four more between Saturday and Sunday.

One of the most anticipated events of the summer also begins today: Event #6, the $111,111 High Roller for One Drop No-Limit Hold’em will bring out many of the game’s top pros. We’ll bring you the latest on Saturday, so be sure to check back for a detailed update.