World Series of Poker Circuit grinders across the country cheered on one of their own on Monday in the WSOP Circuit Choctaw $1,675 Main Event. The tournament drew 908 entries and created a $1.36 million prize pool, with Daniel Lowery delivering to win his sixth gold ring and $258,784 in prize money. 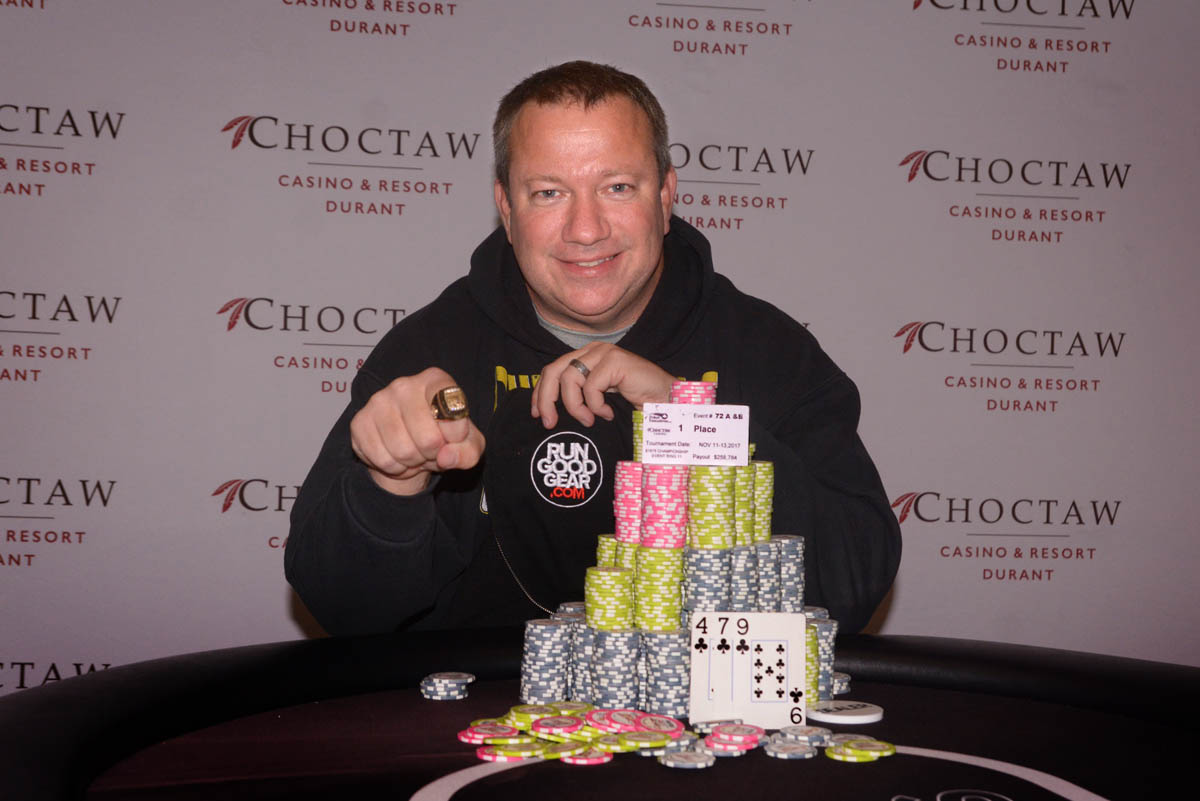 Daniel Lowery moved into first place on the Arkansas all-time poker money list thanks to the biggest score of his career. (Image: WSOP)

The win was not only the largest of Lowery’s career, but also he got a big monkey off his back. None of his previous five rings had come in a WSOP Circuit Main Event, despite the 43-year-old’s having made six main event final tables. He finished runner up three times.

“I’ve been in so many big spots and come up second three times,” Lowery told WSOP officials after the win. “I felt pressure today that I’ve never felt. There’s been so many people saying ‘Oh, you’re going to get second again?’ and it just rings in my head. After a while it does get to you, I guess.”

Usually, Lowery would’ve won a seat into the 2018 Global Casino Championship. However, he already had a seat after winning Casino Championship honors in Tahoe the week prior. But still, aside from the prize money and his sixth gold ring, winning came with something else.

“The ring doesn’t mean two sh**s to me as much as that,” Lowery said while pointing to the champion banners that hang at the Choctaw casino in Durant, Oklahoma.

“Here at Choctaw, it’s like my home away from, really. There’s five banners up here from my teammates and they’re always bragging and talking about ‘Oh, Lowery gets there all the time, but he can’t finish.’”

The win moved Daniel Lowery into first place on Arkansas’ all-time poker money list, with $1,409,351 in career earnings. That allowed him to leapfrog his friend and former leader Michael Sanders, who has $1,239,300 and also was competing at WSOP Choctaw.

The only other player to have seven figures in career tournament earnings is inaugural WSOP Circuit National Champion Sam Barnhart, who has won $1,002,277 over the years.

Fortunately for Lowery, Walter Rodriguez dispatched Eyster in eighth place, and Hanner would soon follow him out the door in sixth. As fate would have it, “Minnesota Jon” fell to Lowery in Level 30 (40k/80k/10k) when Hanner moved all-in for 680,000 under the gun with A♣4♠ and Lowery called from the small blind with the K♦K♠.

Hanner saw the ace he was hoping for, but it was all for naught as a king also appeared. The board ran out A♠K♣Q♥6♣7♦ and that was the end for Hanner. Soon, Lowery and Rodriguez were battling for the title, and in the final hand of the tournament the eventual champ raised to 400,000 and then called when his opponent moved all-in for approximately 2 million.

Finishing runner-up in a circuit main event is a position Lowery knows all too well, but this time, finally, as his friends cheered, that was not his fate.

It’s a pleasue to know about these players , when you see a 6th circuit ring winner and 6 times runner-up Circuit Main Event it’s kind of motivation and push you to work more and more about your game , and prove that’s not a luck game but the most important is your skills.