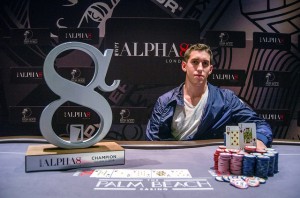 Daniel Colman, whose happy and sad faces don’t look much different from each other, scored another big win by taking down the WPT Alpha8 tournament in London. (Image: bluff.com)

Daniel Colman, the man who’s not sure he likes poker but can’t stop making money at it, has won yet another high-roller tournament, this time taking down the World Poker Tour (WPT) Alpha8 event in London to secure a £600,000 ($967,000) score.

The win makes the sixth time this year that Colman has won more than $700,000 in a tournament, including four major tournament victories.

The win came at the first event of Season 2 in the WPT’s Alpha8 tour, which is comprised solely of super high-roller events. Colman was one of just 17 players to take part in the tournament, though thanks to reentries, there were a total of 23 entries in the field.

Two of those players, Colman and runner-up Max Altergott, were among those who entered into the tournament twice. They both made the most of their second bullets, leading to a heads-up battle that went back and forth several times before a winner could be determined.

At one point, the last two contestants actually sped up the tournament by asking the blinds to be increased to 50,000/100,000, which meant there were only 23 big blinds in play between the two of them. That inevitably led to a few all-in confrontations in short order. On the final hand, Colman had the chip lead and saw his J8 improve with an eight on the flop. Altergott’s K4 saw no help, and Colman had secured the title.

Any win of this size is bound to create some headlines, but Colman’s win was even more head-turning because of the incredible year he’s been having. Virtually unknown heading into 2014, Colman has rocked the poker world by winning more than $22 million in the past six months, vaulting him into third place on the all-time live tournament money list.

It would be easy to dismiss this as being a result of one big win. After all, Colman famously won the Big One for One Drop, earning him a $15.3 million payday that ranks as the second-largest in poker history. But his incredible journey started two months before then, when he took home over $2.1 million by winning the Super High Roller event at the EPT Grand Final in Monte Carlo.

The run didn’t stop after World Series of Poker, either. A second-place finish at the EPT Barcelona Super High Roller netted him another $1.1 million in August. Just over a week later, Colman struck again, this time winning the Seminole Hard Rock Poker Open for more than $1.4 million.

While Colman’s run has been unbelievable, he’s garnered just as much attention for his personality as his poker skills. The enigmatic Colman created controversy when he avoided talking to the media or celebrating after his Big One for One Drop win, later saying that he had mixed feelings about the game of poker.

At the final table of the EPT Barcelona Super High Roller, Colman and Olivier Busquet wore t-shirts with political slogans advocating for Palestine, which prompted a change in PokerStars’ policy towards what is allowed on player apparel at events with video coverage.

Oh my god. Surely this is the best year ever?

By far it has to be. Maybe we should try hard to NOT enjoy poker and the wins/cashes may start to roll in.