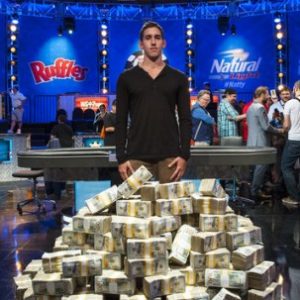 Daniel Colman (shown here at his WSOP 2014 Big One for One Drop takedown) continued his incredible run of success this year by winning the Seminole Hard Rock Poker Open. (Image: espn.go.com)

Daniel Colman was already about as hot as any poker player has ever been. What he did this week, then, has turned his recent run into the stuff of legends. Colman won the Seminole Hard Rock Poker Open (SHRPO) Main Event on Wednesday, earning himself a win worth $1,446,710. Colman outlasted a field of 1,499 entries (including many players who reentered over the course of multiple starting days) to take down the top prize in the event, which had a $10 million guarantee.

That guarantee was set to be the biggest story of the tournament before Colman walked away with the win. While the size of the field was impressive, it was only enough to come up with a prize pool of about $7.5 million. That left a massive $2.5 million overlay: something that meant both great value for the players who entered and a huge out-of-pocket expense for the Seminole Hard Rock casino itself.

While the guarantee wasn’t met, the attendance was still fairly strong, especially considering that other major tournaments were also being held in North America at the same time. And with $10 million on the line, plenty of professionals took part in the event.

Colman and Leah Face Off for Title

And ultimately, the cream rose to the top. Two of the hottest players in the world made it to the final table, as Colman was joined by Mike Leah. While Leah may not be quite the name that Colman is, he had already won four events this year going into the SHRPO Main Event. In fact, the two of them had the largest stacks heading into the final stage, where they were joined by Joe Kuether, Martin Hanowski, WPT champion Shawn Cunix, and 2010 November Nine member John Dolan.

But in the end, it came down to the two players who have been atop so many tournaments already this year. Leah had entered the final table with the chip lead, but by the time that heads-up play began, it was Colman who held a slight advantage.

Colman, who is known as a heads-up specialist online, then took control of the tournament. He steadily increased his advantage until he held more than a 3-1 chip lead. In the final hand, Leah shoved with QJ suited, only to run into the AK of Colman. When no help came for Leah, Colman had secured yet another title in his amazing 2014 run.

The win marks the fourth time this year that Colman has won at least $1 million in a tournament. The run started when he took home more than $2.1 million at the EPT Grand Final’s Super High Roller tournament. Then came his most famous win at all: the $15.3 million score at the $1 million buy-in Big One for One Drop. He then finished 2nd in a Super High Roller at EPT Barcelona (winning just over $1.1 million) before his win at the SHRPO.

Colman’s wins haven’t been without controversy, though. He was notably unexcited after his One Drop victory, and later clarified that he found poker to have a “dark” side and that he was conflicted about the game and the effects it had on many players. Later this year, he sparked controversy when he and Olivier Busquet wore t-shirts advocating for the Palestinian cause during the EPT Barcelona Super High Roller.