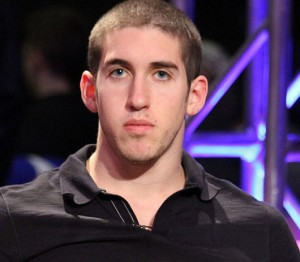 Daniel Colman, AKA Mr. Personality, has conceded that he maybe went a bit far in roasting fellow pro Phil Hellmuth, who might actually be an “overall nice guy,” according to Colman. (Image: pokerstrategy.com)

If only Daniel Colman’s social graces were as good as his poker skills. As it is, it seems Colman is pretty hot-headed, but apparently he’s had the weekend to reconsider some scathing comments he made late last week about Phil Hellmuth.

Colman seems to have softened his stance towards Hellmuth a tad, following his recent astonishing online attack of the Poker Brat. Colman took to the TwoPlusTwo forums to eviscerate Hellmuth last week, calling him a “cancer to society” and “a charlatan,” and labeling him “embarrassing” and “pathetic.”

The source of his hatred, it seems, was Hellmuth’s (perceived to be) patronizing handshake, just after Colman kicked off his insane tournament winning streak for 2014 at the Big One for One Drop at WSOP this past summer (“as if he’s the gatekeeper to the poker world and welcoming me inside,”), along with his “spineless” self-promotion and self-marketing.

But now, perhaps having been unaware that his words would actually be read by Hellmuth, Colman has conceded that he may have been “too harsh.”

Hellmuth did see the outburst and quickly took to Twitter last week to express his woundedness. “Ouch, I was just attacked big time on a terrific poker forum: TwoPlusTwo,” he said. “It was personal and it hurts, but I am proud of the man I am!”

A chastened Colman had the following to say, while not astoundingly refusing to completely back down: “Maybe a bit too harsh, not exactly a cancer to society but it definitely doesn’t do us any good when people like him shamelessly self-promote and try and sell themselves to you,” he said.

Colman admitted that he “came off poorly” in attacking Hellmuth, but still questioned the latter’s involvement with UltimateBet and the super-user scandal, chastening him for not saying enough on the subject.

“I’m happy to have a dive taken in my almighty twoplustwo street cred as long as we can focus some parts of the discussion on PH’s overall behavior and his representing of UB,” he said. “If I was him I don’t know how I could live with myself being the face of a company whose owners were superusing and stole millions from players, and then shutting down and not paying out its users. I would love to have him come on twoplustwo and answer questions about everything.”

Hellmuth issued a press release expressing his regret about his long-term involvement with UltimateBet in May 2013, saying that he was misled by its owners and made a “horrible read.”

“The media has rewarded him for his antics where he is always belittling the other players and constant [sic] talking about how he is the greatest, concluded Colman. “I am sure this has had a positive effect on his bank account, but I am not willing to go cheer him on as a savvy businessman for it.

“Never met him, apart from [the One Drop], but I am sure he’s an overall nice guy, just really not a fan of how he conducts himself.”

Then, in case we were under the impression he was warming to “overall nice guy” Hellmuth, Colman called him a “classless, whiny brat” for good measure.

Dan Coleman talks about Phil Hellmuth and his involvement with UB .

Newsflash Dan Colman ” I am sure your no saint either, like making promises when you win big and sharing your profits”. You shouldn’t be bashing other players when your no different .