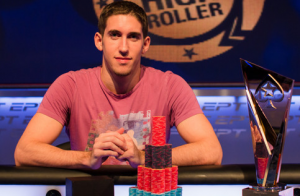 Daniel Colman has been dominating the tables in 2014, and his sustained success has translated into a big lead on the 2014 PoY Global Poker Index. (Image: HighStakesDB.com)

Daniel Colman has been dominating at the tables to the point where he has a ridiculous lead on the current 2014 Player of the Year Global Poker Index. This system is often referred to as the definitive source for poker player rankings and is updated every week.

It takes into account a player’s tournament results over the last six-and-a-half-years. The Global Poker Index (GPI) also ranks players over the last year and at this point, Daniel Colman is making the rest of the field look silly.

According to the Global Poker Index (GPI) as of November 13, the following are the top 10 performers in the 2014 GPI Player of the Year race:

It was only a few short weeks ago that Colman nudged Dan Smith from the top of the mountain for the 2014 Player of the Year race. Also making a run at this is Ami Barer, who leapfrogged four spots to currently sit in second place, courtesy of a couple of final tables during the 2014 Asia Championship of Poker events in Macau. And thanks to an eighth place finish at the ACOP High Roller recently, Anatoly Filatov was able to crack the top 10.

While Colman leads the current POY standings, Dan Smith has a similarly dominating lead on the overall index. Smith ranks first with 4,178 points, with Jason Mercier in a somewhat distant second place with 3,748 points. The rest of the top five include Scott Seiver in third place (3,718 points), Davidi Kitai in fourth place (3,667 points), and Olivier Busquet in fifth place (3.510 points).

Daniel Negreanu, who was recently inducted into the Poker Hall of Fame, currently sits in eighth place on the overall GPI with 3,404 points.

Daniel Colman, who goes by the online name “MRGR33N13”, currently lives in Rio de Janeiro, Brazil, but originally hails from the United States.

As of this writing, he’s the top player in the 2014 Player of the Year rankings on the Global Poker Index and on the overall GPI ranks as the 18th best player. His best live cash was $15.3 million at the 2014 WSOP Big One for One Drop, and he’s also been able to win a million dollars in hyper-turbo tournaments in just nine months time.

Overall, according to the Global Poker Index, which takes both online and live tournament results into its algorithm, Colman has won over $22 million in his short career to date. He is 24 years old.

Colman is arguably one of, if not the most, controversial figure in the world of poker these days. He refuses to promote the game and disregards media outlets. Colman recently blasted superstar Phil Hellmuth on an Internet forum, where he accused Hellmuth of being a “whore” to sponsorship deals and ended by saying people with Hellmuth’s attitude are a “cancer” to the game. He later softened his comments, but not by much.

OMG is that like a smile in the picture, first I’v seen lol

lol I was going to say the exact same thing! Is that smile real 😮