Dan Bilzerian has a passion for guns, women, and gambling (in no particular order). His appetite for guns and women has probably gotten him into some trouble over the years, but perhaps not nearly as much as his gambling love is causing him now. 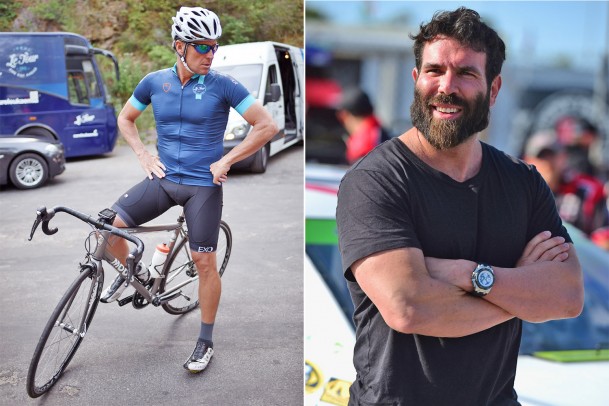 Dan Bilzerian is running out of time to fulfill his $600,000 bet with Bill Perkins. Lance Armstrong is helping train the Instagram King, who must bike from Los Angeles to Las Vegas within 48 hours by March 31 to win the prop bet.  (Image: dailynewsx.com)

The social media icon and high stakes poker player placed a “friendly” wager last month with Bill Perkins, a wealthy businessman and poker player. Bilzerian is betting that he can ride a bike from Los Angeles to Las Vegas in just 48 hours.

If Bilzerian doesn’t complete the journey by March 31, he will have to pay Perkins $600,000. Should he succeed, Perkins will owe him the same amount. That was the original wager. Now the stakes have increased and the plot has thickened.

Rick Salomon, a high stakes poker player and former husband to ex-Playboy model Pamela Anderson, wants in on the action. And he’s not betting on whether or not Bilzerian makes it to Sin City within 48 hours. Nope, he’s putting money on whether the Instagram King lives or dies, or even more charmingly, whether he ultimately suffers brain damage in his attempt to beat Mother Nature at her own game.

If Bilzerian dies or suffers brain damage during the trip, Salomon gets Dan’s G4 Jet. Should Bilzerian make it alive and in one piece within the 48 hours, however, the former Mr. Pamela Anderson will have to ship him $250,000. However, there are some stipulations, according to “Blitz”.

“If I have a heart attack and live, or don’t make it, bet is a wash. This is getting interesting, almost a million on the line now,” Bilzerian posted on his Facebook page.

Finally, if Bilzerian suffers a heart attack, a stroke, is run over by a car, or gets mauled by a pack of hungry coyotes, but lives to tell the story with his brain in tact, the bet is a push. Salomon won’t owe any money and Bilzerian will only have to pay $600,000 to Perkins, which presumably isn’t a lot of money to him.

If Bilzerian makes it alive to Las Vegas, but doesn’t do so within 48 hours, or if he gives up in the middle of the journey, the bet between Salomon and Bilzerian is still a wash. For Salomon to get his private jet, Bilzerian will either have to die or suffer brain damage.

To our knowledge, this is the first time a high stakes poker player has ever bet on another poker player kicking the bucket or ending up drooling into a cup for the rest of his life.

Armstrong in His Corner

Bilzerian isn’t a professional cyclist, so he called upon Lance Armstrong, a man who won seven consecutive Tour de France titles before they were revoked, due to the use of performance-enhancing drugs, to help him out.

Cheater or not, Armstrong understands what it takes to ride a bike long distance. He flew out to Las Vegas to train the poker player.

The impact of Armstrong’s tutelage is yet to be determined, but Bilzerian even admits he needs all the help he can get. And now time is also running out if he is going to fulfill his bet with Bill Perkins: Dan has to complete the grueling and gruesome ride by March 31 to collect his dough.

You are correct 🙂 The story has been amended. Thank you for catching this.