Dan Bilzerian has once again shocked the world. Surprisingly, guns and scantily clad women weren’t involved this time, nor was a presidential run. A bicycle and a ton of money were, however. 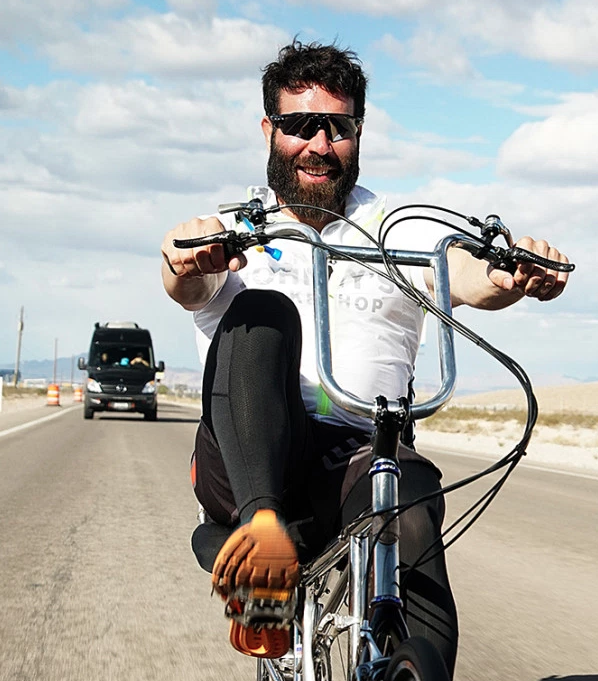 Prop bet or propped up? Dan Bilzerian scored a private escort of no fewer than 10 motorcade cops on his Las Vegas to Los Angeles prop bet journey. But did he make it on his own steam? (Image: barstoolsports.com.)

The social media icon made a crazy high-stakes wager with fellow poker player Bill Perkins and, to the surprise of basically everyone, won that bet.

Bilzerian was confident he could bike more than 300 miles from Las Vegas to Los Angeles (reversing the original plan to go the other way), and in just 48 hours to boot. Perkins bet him $600,000 that he couldn’t.

It was a bet that not many pro athletes would even take, let along an almost-40ish, out-of-shape playboy, but Dan Bilzerian went for it nonetheless.

Blitz was given until the end of March to begin his journey, and had to complete it within two days, no exceptions. There was one other strict rule he was forced to adhere to as well.

Dan was not allowed to use the assistance of a motorized vehicle or device. As to whether the Bilz broke this rule or not, there has been some debate, and it naturally sparked a bit of controversy on Twitter.

During a portion of the ride, Blitz followed closely behind a van, some would say suspiciously closely. Many on Twitter claim he was “drafting”, which could be construed as using a motorized vehicle’s assistance. Perkins said the van was removed about 100 miles away from L.A.

Some Twitter commentators suggest Perkins shouldn’t pay up due to this apparent breach of the rules. But Perkins has yet to voice his opinion on the issue publicly, nor has he refused to pay.

Although it’s uncertain if Bilzerian technically broke one of the caveats, what we do know is that he made it from the historic “Welcome to Fabulous Las Vegas, Nevada” sign to Los Angeles within the designated 48 hours. In fact, he did it in under 33 hours, according the Instagram King, a feat that some would say might put him in a record book somewhere.

No Private Jet for Salomon

Rick Salomon, famous for, among other things, putting the Paris Hilton sex tape on the Internet, will have to settle for being the former husband of Playboy Playmate Pamela Anderson and a wealthy man. The high stakes, super-aggressive poker player also bet on Bilzerian, but made his wager on Dan dying or becoming brain-dead from his bike ride, a reality that fortunately did not come to pass.

In what is one of the most messed up prop bets of all-time, Salomon stood to receive Bilzerian’s famous G4 Jet if Blitz bit the dust or suffered brain damage. The bet would also have been a push if Bilzerian made it to Los Angeles, but not within the designated 48 hours, but with him getting the job done in the required time, Salomon now owes him $250,000.

It’s been a rough day for the celebutant gambler. Not only is he not going to take home a sweet private jet, he’s now out $250,000. Well, maybe. There are rumors in some corners that Rick isn’t going to shell out the dough on the “drafting” issue grounds, so stay tuned.

Everybody Had Money On It

The bike ride prop bet has been a popular discussion on Twitter recently. Once word got out that Bilzerian crossed the finish line on time, some poker pros gave him some props.

“Nice one @DanBilzerian! Watched all of @bp22 (Bill Perkins) periscope updates,” Phil Laak posted on Twitter. “Your ride generated endless entertainment and prop betting for everyone!”

The social media playboy trained with Lance Armstrong prior to the race and will be donating $25,000 of it to the cyclist’s cancer foundation. Dan spent a reported $100,000 on equipment and training to prepare for the race.

I think its great that he completed the ride in just 33hrs. (way ahead of schedule).
What I have difficulty understanding is >> how in the heck do you blow through $100k on equipment & training?