Dan Bilzerian to Row Solo Across Atlantic for $5 Million?

Dan Bilzerian, everyone’s favorite poker playing, gun-toting, beard-sculpting, porn-star-hurling King of Instagram, could be about to enter into one of the most grueling prop bets imaginable. 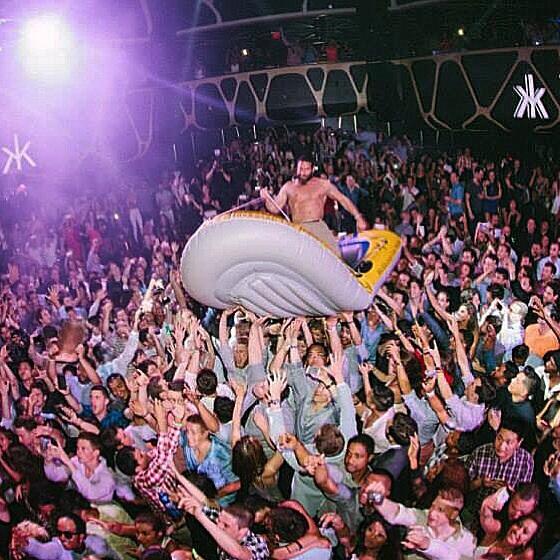 Dan Bilzerian may be a natural at crowd-surfing in a rubber dinghy, but could he row this vessel 3,000 miles across the Atlantic? Bill Perkins’ $5 million says he can’t. (Image: Hakkasan)

Having owned Interstate-15 on two wheels using nothing but pedal power, Bilzerian now wants to conquer the high seas by rowing solo across the Atlantic Ocean.

In April, Bilzerian completed his much-publicized 300-mile bike ride from Las Vegas to the Hollywood Hills in just 33 hours, winning $600,000 from natural gas tycoon and hedge fund manager Bill Perkins in the process.

There was talk, back then, of a double-or-nothing bet, with the idea of rowing from England to New York, or climbing Mount Everest suggested, but it was to be Perkins’ turn to suffer the ordeal.

But as Bilzerian explained to Card Player this week, a few recent bad poker sessions has made his need the greater. The Blitz explained that he had “lost a few million” playing poker this year, despite playing only once or twice a month, and the $5 million bet would help him fix the hole in his bankroll.

They say it’s never good to chase your losses, especially not for 3,000 miles in a tiny rowing boat while being buffeted by high winds and Atlantic spume.

Of course, Bilzerian is no stranger to extreme physical exertion on the high seas, but it usually takes place on his yacht with a babe.

But in this case, he would have to be at sea for three months, by his own estimation, and it would be a grueling and dangerous ordeal, particularly for a man who suffered two heart attacks before the age of 32.

While team crossing are relatively common, as Bilzerian himself points out, fewer people have rowed solo across the Atlantic than have walked on the moon or climbed Mount Everest. It is possible to do it quicker than three months, though. And since you asked, Charlie Pitcher of Great Britain holds the current world record, taking just 35 days to complete the 3,000-mile trip.

Bilzerian said that neither a date nor a route has been set and neither had he yet begun any kind of training regime.

During the preparation for his bike bet, he famously hired the services of disgraced cycling legend Lance Armstrong to help with his training regime.

Asked what he plans to do to prepare for the Atlantic crossing he simple replied, “Probably a lot of rowing.”