PETA is up in arms over a Dan Bilzerian Instagram video in which the poker playboy fed a giant Kodiak bear in front of a crowd at a house party on April 20. The animal rights organization claims the social media icon is “exploiting” animals for his own pleasure and threatened legal action. 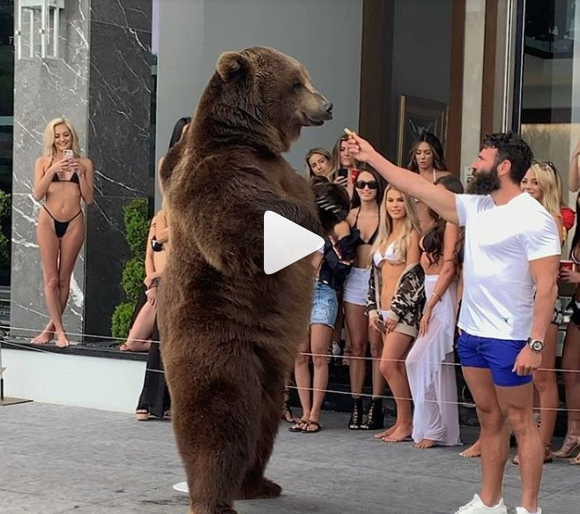 Bilzerian, who has 27 million Instagram followers and another 1.5 million on Twitter, isn’t about to apologize. He’s quite proud of the entertainment he provided to his guests. “Blitz” has more money than he can spend, and he doesn’t particularly care what anyone thinks about him.

When an animal is treated poorly, PETA calls out the alleged culprits publicly. Some people don’t like their tactics and claim the organization often exaggerates the truth. But, right or wrong, the negative publicity can have lasting affects on one’s reputation.

Bilzerian, however, likely won’t have to worry about that. He already has enough haters and, perhaps, just as many people who love him for the entertainment value and don’t particularly care about his character.

With that said, he might care if the cops come knocking on his door or he’s slapped with a massive lawsuit. If PETA gets their way, “Blitz” will suffer some consequences (maybe for the first time in his life?).

This wannabe-celebrity is known for EXPLOITING wild & endangered animals for Instagram likes—& keeps doing it ?

He recently forced a bear to “entertain” his party guests—and PETA’s taking it to the authorities.https://t.co/Tn5p6su7me

The animal rights group didn’t specify what legal course of action they are taking. Bilzerian isn’t likely to see the inside of a prison cell for supposedly “exploiting” a bear. But they could file a lawsuit.

Carolyn Englar, who writes for PETA.org, referred to Bilzerian as a “wannabe celebrity” in a recent article. That’s an interesting moniker for someone with 27 million followers. Perhaps, “actual celebrity” is more fitting, but we digress.

She maturely wrote that the “troubled socialite’s recent act of cruelty and douchebaggery occurred at his 4/20 party in Los Angeles.” Englar says PETA has contacted local authorities about Bilzerian because, as she claims, he didn’t have the “required city permit” to bring a wildlife animal onto his property.

Dan Bilzerian Has a Message for PETA

Bilzerian, who is apparently quite the wordsmith, eloquently told PETA what he thinks of their complaint.

The poker player also told TMZ he cares about animal rights. But, like many, he doesn’t think PETA’s intentions are as they claim.

“(PETA just wants) to do the typical internet bandwagon on whatever is popular and come after me for feeding what seemed to be a very healthy happy bear, that was rescued at a young age,” he said.

Bilzerian is worth millions of dollars but his wealth has come under question by many in the poker community. He claims he has won over $50 million playing private poker games. But some poker players, including Doug Polk, dispute that claim and suggest he inherited the money from his wealthy father, Paul Bilzerian.

We don’t have a clue how Dan made his money but we do know he’s entertaining.