Social media maven Dan Bilzerian told sports journalist Graham Bensinger that contrary to popular belief, he made his own money through poker and isn’t spending an inheritance. During one lengthy session, the notorious bearded, gun-toting womanizer said he won $12.8 million. 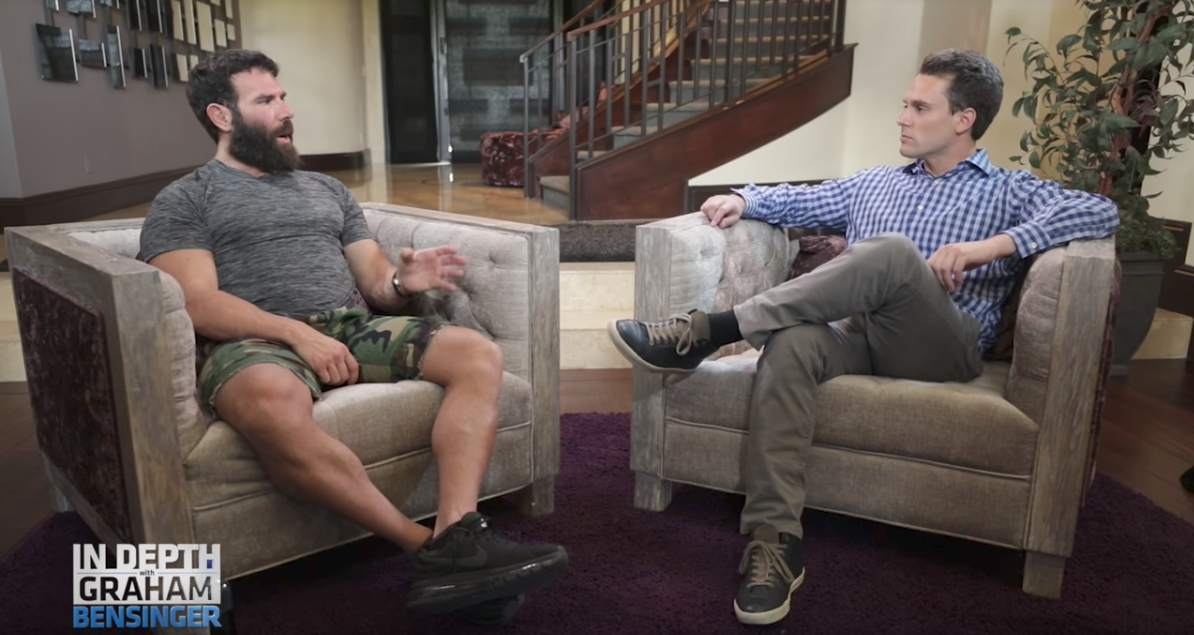 “You’ve lost $3.6 million on three different occasions. How about the most you’ve ever won or lost?” Bensinger asked during a sit-down interview at Bilzerian’s Las Vegas mansion on his syndicated interview program “In Depth with Graham Bensinger.”

“I think it was $12.8 (million),” the Instagram legend with 22.6 million followers responded. “But it was over a period of three games.”

He didn’t mention his opponent in the game nor when and where it occurred. But he did say his opponent was a billionaire and a “maniac,” so he did sweat about the possibility of being put all-in for the nearly $18 million he had in front of him.

“After a night like that, what are you thinking?” the host asked.

How He (Allegedly) Built His Bankroll

Dan Bilzerian’s finances have long been a topic of discussion in the poker world. Many, including Doug Polk in a YouTube video earlier this year, have suggested he inherited it from his father, Paul, a wealthy corporate raider who spent time in prison, convicted in 2000 for SEC and tax violations in the 1980s.

Paul, as part of his punishment, was ordered to pay back $62 million in interest and profits, but most of that money hasn’t been recovered. The Bilzerian patriarch filed for bankruptcy in 2001, claiming he had $15,000 in assets against $140 million in debt. He had previously filed bankruptcy in 1991, paying nearly $400,000 to settle $300 million in debt.

Many have speculated some of the missing money went to his offspring, a claim Bilzerian denies. The 36-year-old likewise disputes any assertions that a trust fund he gained access to at age 30 had anything to do with his bankroll.

Bensinger asked the social media playboy to address detractors who dispute his accumulation of wealth through poker.

“You have to remove your ego from these situations,” Bilzerian said. “For me, I just let people talk sh*t about my poker and that I was bad and that I had a trust fund because that was very helpful for me to get into these games … I never cared if people thought that I was good. I never gave a sh*t how people thought that I got my money. I still don’t. I don’t give a f*ck if they think I got it all from a trust.”

From Doing Drugs to Teaching Kids

While Bilzerian was training to ride a bicycle from Las Vegas to Los Angeles last year as part of a $600,000 prop bet with fellow poker player Bill Perkins, cycling legend Lance Armstrong contacted him to help. But the poker player wanted more than just some tips on riding a bike.

“I could have anybody teach me how to peddle a bike. I wanted the drugs,” Bilzerian joked, referring to performance enhancing steroid use that marred Armstrong’s career. (Bilzerian claimed his celebrity trainer “skirted” PED questions and never supplied him with any illegal substances.)

In the extended interview viewable in multiple parts on YouTube, Bilzerian relayed other drug tales, such as the time at age 25 when he mixed alcohol, pot, cocaine, and heavy doses of Viagra. That misadventure started at a strip club and included a stop at a casino before ending in the hospital, where he experienced two heart attacks and an awkward confession in front of his parents, his girlfriend at the time, and his doctor, Conrad Murray, who would later serve two years in prison for prescribing the drugs that ultimately killed Michael Jackson.

The interview addressed other non-gambling topics as well, including Bilzerian’s intent to become a teacher in the future. That’s right, the multi-millionaire says he’s received his teaching license in California, and says he’s serious about taking up the profession.

He wouldn’t say where he will be teaching because he “doesn’t want a million assholes showing up at school and ruining my cover.” But he said he will “soon” enter a classroom to teach, “just for the hell of it.”

“It seems like it would be kind of cool to actually teach kids important stuff,” Bilzerian said. “I feel like you learn so much useless sh*t in school.”

“Yeah, but you have to stick to the school’s curriculum. You’re a substitute teacher,” Bensinger said.