Dan Bilzerian and Hillary Clinton Do Business Over Private Jet 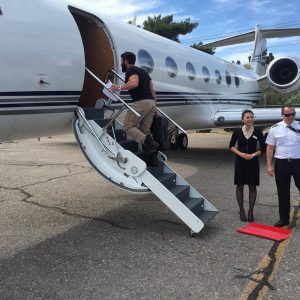 Dan Bilzerian is a man with friends in high places, but he might have just forged a relationship with the next president of the United States, Hillary Clinton.

Clinton is currently on the campaign trail across the US in a bid to become the first woman in charge at the White House and to ensure she gets to her destinations well rested she’s chartered a fleet of private jets.

Officially known as campaign planes, or press planes, the private jets are leased from various sources, one of which is poker pro and millionaire playboy Dan Bilzerian.

Quite how the self-styled King of Instagram struck up a business relationship with a potential president is unclear, but what is known is that Clinton is now flying across the US in a plane that’s seen some extraordinary scenes.

In fact, a quick scroll through his social media accounts reveals a myriad of scantily clad women, expensive drinks, guns and, of course, games of poker taking place aboard the luxury jet.

Whether or not Clinton knows the extent of Bilzerian’s antics in the plane isn’t clear, but it’s highly unlikely she’ll be posting any risqué selfies in the style of its owner while she’s campaigning to become president.

For Bilzerian, leasing his jet to a presidential candidate is just another moment in his fairytale life. At the end of last month, he managed to win a $1.2 million prop bet against Bill Perkins after he cycled from Las Vegas to LA (300 miles) in 48 hours.

Thanks to some help from Lance Armstrong and the slipstream of the camera car in front, the action junkie was able to defy the odds and add another $600,000 (both men risked $600,000) to his bank account.

While it’s unlikely Clinton is paying him as much as that to fly around the country, it’s certainly another notch on Bilzerian’s already highly decorated bedpost.