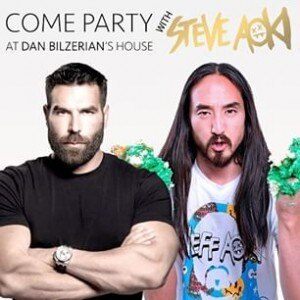 To many members of the poker community he’s the rich kid with too much money and lax morals, but Dan Bilzerian defied his public persona on Saturday when he hosted a poker event in the name of charity.

Working alongside Steve Aoki and Dan Fleyshman, Bilzerian lent his party planning experience and lavish pad in the Hollywood hills to the Steve Aoki Charitable Fund.

Working to raise funds for brain research, the charity poker tournament/ celebrity party was, by all accounts, a huge success both financially and for all in attendance.

Competition Winners Party with the Stars

In addition to hosting the party, Bilzerian also agreed to fly four lucky people out to the event so they could play poker with the stars.

Announcing the competition at the start of April, the rules were simple: register as a fan of the event and wait to see if your name was chosen.

Those that made the cut were not only given enter to a $1,000 MTT with a $500 rebuys, but the chance to party alongside the likes of Ludacris and Vin Diesel.

As expected, the winners, as well as everyone else in attendance, enjoyed a night of betting, booze and bare chests and a quick count of the takings suggested that as much as $100,000 could have been raised for charity.

Not only that, but the winner of the tournament (who hasn’t been named) managed to bank a plethora of prizes, including tickets to the forthcoming Pacquiao vs. Mayweather fight.

“See you at the final table next party. Don’t miss out! First place last night got 2 tickets to the Pacquiao vs. Mayweather fight @solrepublic headphones one month free private jet flights from @surfair and more,” Aoki wrote on Instagram.

With the event declared a success, Aoki took to his Twitter page to tell his 2.5 million followers that there will be more chances to ante-up in the near future.

Planning to make the events a regular thing, Aoki promised that he’ll be running in aid of charity so even if he missed out on this one there will be plenty of opportunities to ante-up and throw down in the future.

Although the latest Bilzerian/ Aoki poker party is over, you can relive all the revelry courtesy of the pair’s social media accounts.

Dan Bilzerian is one carzy guy, he never fails to let me down with his crazy shenanigans.