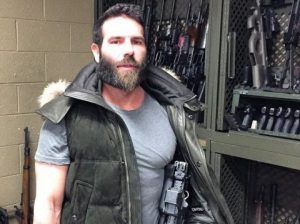 Flashing his guns: Instagram playboy Dan Bilzerian’s BLM PSA suggests he should keep his day job. If he had one. (Image: Instagram)

Dan Bilzerian’s new public service announcement about the danger of firearms has hit YouTube, and despite the release date, it was no April Fool’s joke.

The bad boy poker player and of “King of Instagram” agreed to star in the video, which examines the folly of blowing stuff up in the desert, for the Bureau of Land Management (BLM) as part of a recent plea bargain that helped him escape jail time.

Bilzerian was arrested for possession of bomb-making equipment at LAX in December, along with co-defendant Jeremy Guymon. It seems that the pair had been messing around with ammonium, aluminum powder, and ammonium nitrate, which, when mixed together, will act like pure TNT.

Facing a possible five years in prison, Bilzerian agreed to plead guilty to lesser charges of which there were certain conditions, this dubiously helpful video being one. Thus, we have the most lackluster performance in the history of PSAs, itself something of a lackluster genre, as a surly and somewhat lethargic Bilzerian reluctantly mouths his way through a strangely stilted script.

“As an avid shooter, please remember to shoot responsibly and follow the rules,” he warns unenthusiastically, in front of a giant portrait of himself leaping over a poker table with two buxom blondes clinging to each thigh. Apparently the BLM wants to reach a younger, hipper target demographic.

“Public lands are for everyone’s use. Please clean up after shooting so that others can enjoy the land. When shooting explosive rifle targets check with local and state laws.

“Just because you can buy an exploding target doesn’t mean it’s legal to mix and explode,” he continues to mumble monotonously. “Check with the landowner that it is on private property and verify that it is legal to do it on public lands.”

Once more, with feeling, Dan.

An outtakes video, uploaded to Bilzerian’s Facebook page yesterday, shows a scene that did not make the final cut.

“If shooting exploding targets, use only the intended-use containers, as this is not the intended use,” reads Bilzerian from the teleprompter, before stopping to lean forward.

“Misuse has caused several states to ban exploding targets, with others proposing to do the same for the misuse,” he continues, with as much expression as the Dan Bilzerian action figure that stands next to him on his desk.

And as he signs off with the line, “Remember: be responsible with firearms and the use of exploding targets,” the look on his face says it all.  We could say something here, but we’re afraid, so we won’t.

Now these are poker news!!!