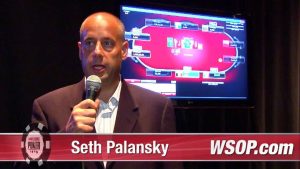 The Daily Fantasy Sports (DFS) scandal that’s currently rocking the industry in the US has brought a temporary end to the relationship between the World Series of Poker (WSOP) and DraftKings.

The rise of DFS and companies such as DraftKings and FanDuel in the US has been impressive to say the least over the last 12 months; however, after shockwaves ran through the industry recently, the poker community is now starting to feel the effects of these tremors.

The previously blossoming relationship between poker and the hottest craze in the US now appears to be waning after the WSOP announced that it would be putting its deal with DraftKings on hold.

The leading DFS operator has been a presence at the WSOP for a number of years in one form or another (2012 Main Event champion Greg Merson wore a DraftKings patch); however, with legal issues brewing in Nevada, there will be no more talk of DFS at this year’s festival.

With the WSOP November Nine set to return to Las Vegas on November 8 to play out the remaining levels of the Main Event final table, DraftKings had expected to be a part of the overall sponsorship package.

However, following Nevada’s recent ruling that DFS constitutes a form of gambling and should, therefore, be licensed by the state, both DraftKings and FanDuel have ceased offering services to local residents.

Not wanting to poke the bear and cause any further issues for DFS, itself or, indeed, the poker industry, DraftKings has asked the WSOP to call time on their partnership for now.

In a statement released by the WSOP this week, Seth Palansky explained that DraftKings wouldn’t be represented in the final WSOP events of 2015, but he deliberately stopped short of suggesting the deal was completely over.

“In light of last week’s news in Nevada, DraftKings asked us to cease any sponsorship activities around the remaining few WSOP events of the year, and we complied,” said Palansky.

Are Poker and DFS Heading for a Break-Up?

Although this deal won’t have much of an impact on the forthcoming WSOP Main Event final, it could be a sign of things to come.

With DFS facing a similar wave of legal scrutiny and state persecution that hit online poker a few years ago, the amount of money being spent on advertising could quickly dry up.

Over the last 12 months the ties between poker and DFS have gradually strengthened owing to the similar skill sets utilized by players.

However, with the WSOP putting its sponsorship deal on hold and other interested parties, such as Amaya and StarsDraft, backing down in the face of legal ramifications, it looks as though the bonds between the two industries could weaken in the coming months.