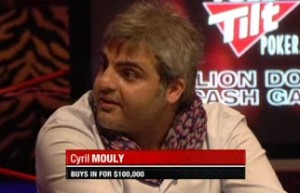 Cyril “The Frenchman” Mouly survived an apparent attempt on his life, but is still embroiled in a trial in Bordeaux. (Image: FullTilt.com)

The possible attempted murder of high-stakes poker player and alleged fraudster Cyril “The Frenchman” Mouly has been reported in the French press this week. The attack – which resulted in the fatal stabbing of Mouly’s unnamed driver – occurred shortly after midnight on Tuesday in the lobby of Mouly’s apartment building in Paris’ 17th arrondissement. According to a statement the 38-year-old Mouly made to police, he and his driver were ambushed by two men in crash helmets wielding knives. Mouly fled to get help while the driver attempted to fend off the attackers. When he returned to the scene with police, the driver was found lying dead with 12 stab wounds to the chest.

It’s currently unclear whether “The Frenchman” was the true target of the attack, but he must certainly have made some powerful enemies during his alleged career as a confidence trickster. Mouly appeared in court in Bordeaux last month accused of being the brains behind an advertising scam that defrauded businessmen of €15m (US$20,845,458) in 2007 and 2008. Posing as a Treasury official, Mouly contrived to sell companies bogus advertisements in administrative directories and trade journals. One company alone – SNR Roulements from the Annecy area – was defrauded to the tune of €6.5m (US$9,029,964) for one of Mouly’s phantom ad campaigns.

Mouly was tried with 30 suspected accomplices – one of whom is understood to be the now-deceased driver – in March at Bordeaux Criminal court, where the prosecution requested that he serve six years in prison. The trial is ongoing.

For one who was at the time wanted by Bordeaux police and later Interpol, Mouly did little to conceal himself from authorities. In 2009, he brazenly appeared in Bobby’s Room at the Bellagio – one of the highest stakes poker rooms on the Las Vegas Strip – where he traded blows across the felt with the likes of Phil Ivey and Tom Dwan, ostentatiously spewing his ill-gotten gains and fueling speculation as to the source of his bankroll.

He became the subject of much speculation on Internet forums, and even turned up to play in a televised episode of the Full Tilt Million Dollar Cash Game later in the year. And while the French authorities hunted him, he became the subject of a memorable TwoPlusTwo Internet meme, after one opening poster attempted to identify the mysterious new arrival at the high stakes tables, with an unintentionally hilarious sketch.

Despite his appetite to take on any player in the world, Mouly’s playing style was spewy and he showed a marked disinclination to fold any hand, making him a dangerous – but ultimately desirable – opponent for the high-stakes pros.

Finally, as the heat closed in, Mouly fled to Morocco where he was arrested and extradited to France. Cyril Mouly had his fair share of luck at the poker tables of Las Vegas, but today, it seems, he’s simply pretty lucky to be alive.