The value of a Bitcoin is only worth a fraction of what is was a few weeks ago, and many poker players who invest in cryptocurrency seem to be getting nervous. 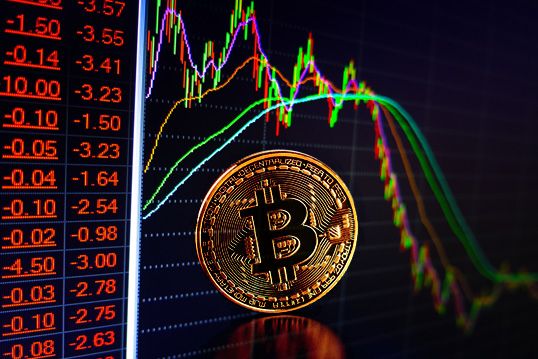 Bitcoin took a plunge on Monday and some poker players are worried. (Image: igaming.org)

As of Tuesday morning, Bitcoin was valued at just a shade over $7,000, a far cry from the $19,000 price it hit in December. Still, one Bitcoin is worth approximately seven times more than in February 2017.

But the recent plunge has investors worried and some, including noted economist Nouriel Roubini, are concerned the bubble will completely burst.

“HODL nuts will hold their melting Bitcoins all the way down to ZERO while scammers and whales dump and run,” Roubini predicted on Twitter.

Doug Polk doesn’t share that pessimism. The high-stakes poker pro-turned-cryptocurrency enthusiast says he is taking a long-term approach to his investment in Bitcoin and other “alt coins.”

“Hope everyone spent their #Bitcoin for some Lambo’s in January. At this point it’s looking like a much stronger investment vehicle,” he joked on Twitter.

When asked if he would pivot back to creating poker videos if BTC completely tanked, he said, “if Bitcoin was worthless I would still be doing way less poker content … The second half of last year I saw poor growth and poker content was my focus. Occasional poker videos make sense but I can’t go all-in in an industry where if there isn’t much room for growth.” he wrote.

Fedor Holz, the youngest player ever to hit the $20 million live tournament winnings mark, shared his investment strategy with his Twitter followers.

“Jokes aside: I suggest to make risk management a high priority,” the 24-year-old advised. “Its a tail-heavy investment. I trade less than once a week (I’m mainly bullish on the tech) and react to events. I keep around 7-7.25% of my net worth in crypto. So I sold on the way up and start buying more now.”

He followed that up with some tried and true advice, “Don’t put all your eggs in one basket.”

Dan “Jungleman” Cates used a poker analogy to question those who are mass selling off Bitcoin.

“I don’t really *get* panic selling. If you lose a lot of money, don’t you want to GET EVEN and not bite the loss?” he wrote.

“In retrospect, I should have known that we reached peak Crypto when the guy who was selling UWheels ‘hoverboards’ in my building a few years ago started offering Crypto Seminars. Oh well,” he posted.

After some of his followers assumed from that post he was selling off all his Bitcoin, Voulgaris clarified, saying he was only being sarcastic.

Four major US banks (JP Morgan Chase, Bank of America, Citi, and Capital One) have barred customers from purchasing cryptocurrency through credit cards.

It’s unclear how much of an impact this move will have on the future of Bitcoin and other forms of cryptocurrency. Investors can still use debit cards and bank transfers to make a purchase.

Banks are concerned that cryptocurrency investors could rack up unaffordable credit card debt if the value of these virtual coins continues to drop. As a precautionary measure, these banks have barred customers from purchasing via credit card.

wonder if the other crypto currencies are as profitable as bitcoin, seems like no one ever mentions the other ones

As someone with very limited crypto-currency knowledge I am both interested to know more about Bitcoin, but also wonder what the key difference is between this and other investments.

For starters, any tradeable asset with value that rises in value as much as Bitcoin did must have known a correction was coming. For this to grow from essentially nothing this time last year to over $25k is “too good to be true”. Today it trades at just below $10k CAD, or 40% of its top end value.

So the two questions that I wonder:
– Will Bitcoin become a true digital currency, and if yes, how will merchants accept relative to traditional currencies? Like…if you had one bitcoin and $5000 USD, will the majority of merchants catch up and offer conversion between them on e-commerce sites, or will Bitcoin be regulated to never, smaller vendors?
– Will Bitcoin be recognized by the big banks to the point where you could trade / buy the currency in electronic forms? Currently they don’t touch it, but when will that change?

Interested to see where this goes…but for now it may be time to buy.

This is exactly why I can’t wrap my head around cryptos. Imagine going to the grocery store and buying a loaf of bread and 2l of milk, paying with .000001 shares of IBM. The groceries “cost” less today than yesterday, more than tomorrow, and I have no idea of what any of those “prices” are in my real life unless I relate them to the price marked in the store (in CAD, with which I did NOT pay for them). When spending my “wealth”, I cannot relate every purchase to the value of an unstable commodity. It’s bad enough that individual countries’ currencies are as unstable as they are, but at least the instability is limited to the population that deals with that currency.