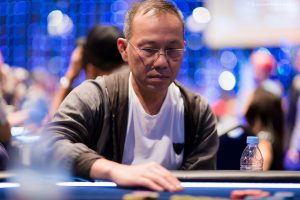 Paul Phua catches heat for showing up at the Aussie Millions, after an unnamed ESPN source claims the poker pro once fixed two English Premier League matches in the late 1990s. (Image: pokernews.com)

Paul Phua may be off the hook legally for his alleged involvement in a World Cup sports betting scandal at Caesars Palace in Las Vegas in 2014, but the Malaysian poker pro is still under scrutiny by many.

The latest bout involves the Australian media, who have come out guns blazing regarding the Crown Casino Melbourne decision to fly Phua into town on one of its corporate jets before the recently wrapped Aussie Millions poker festival there.

Four Corners, Australia’s longest-running investigative journalism and current affairs program, said that Phua had been identified by state and federal law enforcement as “a potential threat to the integrity of sport across the country.”

In case you missed the case, which lasted many months in Las Vegas’ courts, Phua was arrested by the FBI in Las Vegas in June 2014 and accused of operating a multimillion dollar World Cup betting operation from a “wire room” installed in a luxury villa in Caesars Palace.

Twelve months later, the Malaysian walked from court a free man, as the judge tossed the evidence against him as having been obtained illegally, and the prosecution’s case collapsed.

Representation by arguably one of the world’s best, and no doubt priciest, legal defense teams with David Chesnoff and Associates no doubt also helped Phua leave court with no more than a massive legal bill.

The judge ruled that the FBI had violated Phua’s Fourth Amendment rights when it shut off wireless access to the villas rented by Phua and his associates in order to gain access by posing as repair technicians.

However, since then, an ESPN exposé has revealed extraordinary details about a man that most in the poker world only knew vaguely as a “Malaysian businessman” and fixture in the big games in Macau. According to ESPN, Phua is the biggest bookmaker in the world, the principal owner of the world’s largest sports book, IBCBet, which has since changed its name to MAXbet.

Extraordinarily, he was also described by a fellow Asian bookmaker to ESPN as “by far, the biggest winner at poker in the world.”

But another ESPN source claims that Phua was responsible for allegedly fixing two English Premier League matches in the late nineties, an incident that came to be known as the Floodlights Affair.

In 1997, two games, West Ham vs. Crystal Palace and Arsenal vs. Wimbledon, were suspended when the stadium floodlights suddenly lost power. Because in both instances the power cut occurred during the second half of the games, bets had to be paid as the score stood, in accordance with Asian bookmaking rules.

An alleged attempt to fix a third match was foiled when a security guard who had been bribed to trip the electrics told a colleague about the plan, who then alerted police. Along with the English security guard, two Malaysians and a Chinese man were arrested and imprisoned for their part in the scheme, the first confirmed incidence of an Asian gambling syndicate fixing a match on British soil.

“Paul Phua financed it,” said the ESPN source, an unnamed Phua associate. “If you know the outcome of a Premier League match, you can make an absolutely enormous amount of money. This money allowed Paul Phua to go from being one of the top eight or so bookies in Malaysia to being absolutely massive.”

The Aussie Millions, of course, coincides with the Australian Open tennis championships, a time when many of the world’s best poker players get to rub shoulders with top tennis stars.

But as the tennis world reels from match-fixing allegations of its own, Four Corners questions the Crown’s decision to fly Phua into town at such a sensitive time, particularly in light of rumors about his past.

Four Corners also noted that he stayed in Melbourne for just two days, without, apparently, playing a single hand of poker.

Simple rule of thumb, whenever betting/gambling/money is involved there is a very good chance someone somewhere is cheating or trying to cheat. I dabbled in sports-betting for a short time but stopped when I realized there are too many factors out of my control.