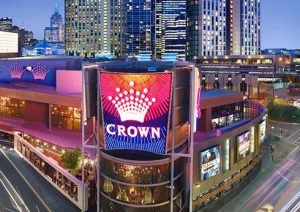 Crown Casino locked in a three-year battle with the government over tax payments on its tournament rake. (Image: crownmelbourne.com.au)

The Crown Casino in Melbourne is known for hosting one of the biggest tournament festivals of the year, but if the state’s regulator has its way then the action at the Aussie Millions could get more expensive.

The Crown Casino has long been seen as one of the top destinations for poker in the southern hemisphere, but the amount of money the casino has been making from its tournament rake has not gone unnoticed by the Victoria gambling regulator.

A three-year battle between the two entities regarding the taxation of tournament rake was recently highlighted by Australia’s Sunday Morning Herald.

Discussing the issue, a representative for the Crown Casino stating that rake shouldn’t be taxed as poker is distinct from other casino games and, moreover, forms a necessary part of a tournament’s dynamics.

“The player plays against other players. The rake also meets the costs of conducting and marketing the tournament,” said a spokesperson for the Crown Casino.

It was also pointed out that poker is played in pubs and clubs across Australia and the rake for these games isn’t taxed by the government, therefore, the Crown Casino shouldn’t have to pay a levy on the money received from raking tournaments.

In opposition to the Crown Casino, public health professor Charles Livingstone of Monash University argues that poker is a form of gambling and should be taxed as such.

Crown to Carry on Regardless

The government and regulator have stated that they are looking into the issue, but since the issue is already three years in the running it’s unlikely there will be a swift resolution to the tax issue.

Regardless of the tax debate, it’s having with the government, the Crown Casino is continuing to innovate and recently extended its commitment to esports.

After signing a deal FOX Sports and ESL Australia to host a Counter-Strike: Global Offensive event last year, the casino has now pledged AUD $70,000 (USD$52,000) to host a Call of Duty invitational.

Welcoming elite players from around the world, including France and the UK, the event is a step forward for the casino’s esports program; however, whether or not it will be paying on tax on the revenue from the event remains to be seen.