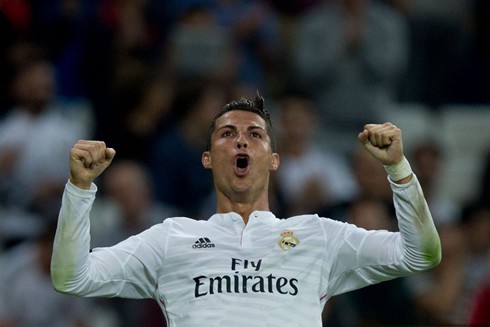 Cristiano Ronaldo announced on Facebook today that he has just been signed by PokerStars. The superstar’s global following makes this a PR coup for the online operator. (Image: ronaldo7.net)

Cristiano Ronaldo is the latest global sports megastar to sign on with PokerStars, which now counts Neymar Jr., Rafael Nadal and (the other) Ronaldo among its “Team Sports Stars” group of brand ambassadors.

Rumors were swirling at the beginning of the month that the Real Madrid star was ripe for the picking, but when Neymar signed instead just a few days later, we all assumed we had simply got the wrong global sports megastar.

The source of the rumors, it seems, was a picture Ronaldo uploaded to his social media accounts of himself playing a private game of poker in which he appeared to be using PokerStars-branded chips.

Today, finally, Ronaldo took to Facebook to announce that the partnership is very real.

“I like playing for winning teams and PokerStars is the perfect partner for me,” said the current World Footballer of the Year.

“As a brand, it is always looking at ways to improve and stay ahead of the curve, and as an athlete that is something I truly respect,” he continued. “I started playing poker a few years ago and I love the competition, strategy and fun. I’m looking forward to taking my game to the online and live poker tables and meeting my fans head to head. Although football is my world, poker has always been my game. I’m very excited to join the team.”

When you consider that Ronaldo is the most followed person on Facebook with 103 million fans, you begin to realize what a mind-boggling PR coup this is for PokerStars. Within three just hours, the post had been viewed by more than 1.3 million people. Is there anyone else on the planet who commands such a reach?

It also makes you wonder what they’re paying him. With earnings of $80 million last year, Ronaldo was second only to Floyd Mayweather in earning power among athletes. Of that, $52 million was salary and $28 million came from endorsements.

But can he play?

Poker, that is. Well, according to Daniel Cates, he can. As bizarre as it sounds, Cates claims that he received a phone call from Ronaldo in 2010, and was challenged to an online session of $1-$2 PLO by the Portuguese winger.

“He beat me for about eight buy-ins,” said Cates. “I was thinking, ‘Wow, I am getting destroyed by this guy and he hardly plays.’”

“Ronaldo is part of a new generation of global superstar athletes that work hard, play smart and encourage their fans to share in their lives,” said Amaya Chairman and CEO David Baazov. “We’re proud that Ronaldo, and fellow elite player Neymar Jr, have chosen to make PokerStars a partner in their journey and to share their love of the game of poker with their legions of fans.”