Could virtual reality (VR) technology be exactly what the lagging US online poker industry needs? If so, its deus ex machina could be waiting to drop out of the sky and save the day pretty soon. A new announcement from Facebook looks like a great place for internet money operators to see how VR is accepted by the masses on the play money site, and help them decide how soon to jump on board with this rather entertaining mode of game play. 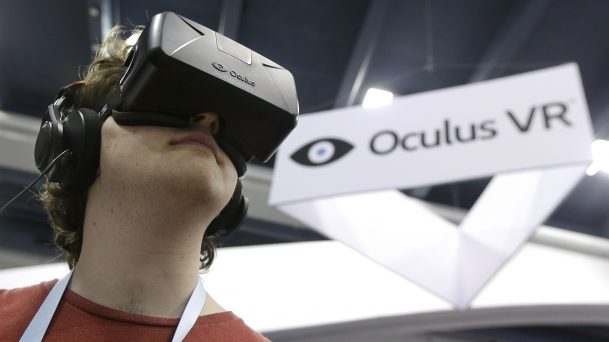 Could Facebook’s foray into virtual reality (VR) poker ultimately help US online poker get the lift it needs? The social media site’s $2 billion investment is about to be put to the test. (Image: Jeff Chiu/AP)

Virtual reality poker is now in the offing for social media site Facebook and its market-leading VR headset Oculus Rift in a collaborative effort. In 2014, the social media site spent $2 billion to grab the VR development company, and now it looks like it’s time to reap the benefits.

In an announcement made October 6, Facebook’s Oculus Room will give players the chance to chat, socialize, and play poker in a virtual setting. Although the details are still vague, reports suggest that an early version of the software will be available for Gear VR in the coming month, with a full version set for release in 2017.

But Facebook isn’t the only new player in the VR arena. Bolt Casino recently showed off its latest development with the help of Twitch streamer tonkaaaap. Although still a work in progress, the software allows users to play against real opponents and do some “real life” moves along the way. Those include things like giving your opponent a high-five or putting your chips into a toy truck and driving them to the middle of the table.

The new VR game appears to bridge the game between live and online poker.

Tonkaaaap’s Twitch video (see below) has already racked up nearly 30,000 views in just a week and viewers appear to be impressed with what they’ve seen.

“This is freakin’ awesome,” wrote TheSzczyt.

“I’ve read about VR poker in the past and wasn’t sure how I felt about it.  This seems pretty damn cool though.  All of the crazy props would make it a lot of fun,” Travis Smith commented.

“Hopefully in 5 more years we have a better version of that for PokerStars or any major site” said Thomas McKibbins.

McKibbins’ point seems to be the missing link at the moment. While software companies appear to be close to perfecting the game in its virtual form, the genre won’t really takeoff until the industry’s top operators get involved.

Going forward, virtual reality options for major sites like PokerStars would not only be extremely lucrative for those involved, but the industry itself. Major operators are currently trying to bring more casual players into the game and VR could be the key that really unlocks this market.

VR and Its Gaming Impact

In 2016, we’ve seen the release of multiple high-end VR headsets and that’s helped create an industry that’s already worth more than $1 billion. As is often the case in times of growth, new products find their way onto the market relatively quickly, and the iGaming industry hasn’t fallen behind the curve.

Back in 2015, Microgaming showed off a prototype of its VR roulette game, which used a combination of Oculus Rift and Leap 3D controllers to create a virtual casino world. With roulette wheels already in motion, poker was bound to jump on board, and Facebook has the bankroll to make it happen.