Daily fantasy sports (DFS) had its day in Congress on Wednesday, as the Subcommittee of Commerce, Manufacturing, and Trade attempted to offer some legal clarity on the contests. The legislative body also attempted to decipher the complicated patchwork of DFS regulation across America, while determining if federal guidance is necessary. 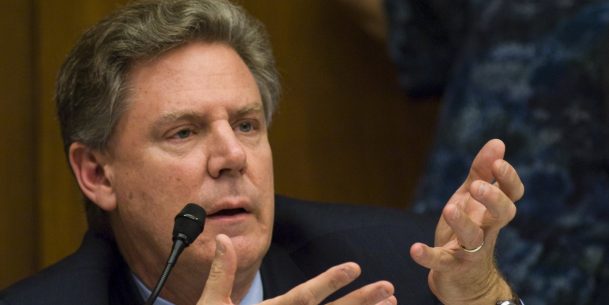 That was the plan, anyway, but answers were thin on the ground at this hearing. Even less visible were representatives of DFS market leaders DraftKings and FanDuel, both of whom opted to swerve the hearing completely.

Instead, representatives of the industry were put through their paces by New Jersey Assemblyman Frank Pallone (D), who had a specific axe to grind about New Jersey’s repeatedly thwarted sports betting ambitions.

The assemblyman was who requested the hearing, and his apparent antagonism towards DFS is perhaps the reason DraftKings and FanDuel stayed away. The crux of Pallone’s complaint is that the major sports leagues have continually sabotaged New Jersey’s attempts to legalize sports betting at its casinos and racetracks with legal challenges, while simultaneously supporting the legalization of DFS, in which they are largely stakeholders.

That’s because some of the leagues have actual equity in DraftKings and FanDuel, as well as sponsorship and marketing deals. DFS, the leagues maintain, is not gambling, but a game of skill: a hypocritical position in the eyes of New Jersey and Pallone.

Interestingly, representatives of said sports leagues were also conspicuous in their absence on Wednesday.

“I must also mention the hypocrisy of those arguing that daily fantasy sports is readily distinguishable from traditional sports betting,” said Pallone. “While quietly applying for and receiving gambling licenses in the United Kingdom, [DFS] operators continue to argue to interested states in the US that, unlike sports betting, it is not gambling.

“Their reliance on the arbitrary distinction of skill and chance is also unconvincing, especially since both the Department of Justice and the NFL have asserted that sports betting also is a game of skill.”

Much Ado About Nothing

There was little sign of any willingness to work toward federal DFS regulation, despite assurances from Steve Brubaker, the executive director of the Small Business of Fantasy Sports Trade Association, that this is something the industry would welcome rather than the confusing and often patchwork state-by-state solution.

“We have companies that are relying on you guys and went out and started their businesses,” he said. “You won’t see DFS companies balk at regulations.”

These sentiments were echoed by John McManus, executive vice president and general counsel at MGM Resorts International, who said that the casino industry also wanted to see uniform regulation and licensing for daily fantasy operators.

“These forms of entertainment will not go away if they’re made unlawful and you will develop a black market,” he said. “As soon as you take money from citizens and are paying them back, you should be regulated.”

Needless to say, the parallels to what’s been happening with online poker in America the past few years are obvious. Regulation and legalization to offset the potential for black market sites, consumer protections, and the push-and-pull between states’ rights and federal oversight make the two pastimes almost mirrors at this point.

Ultimately, the hearing provided few new insights and it is unclear what, if anything, has been achieved.