Comedian Kevin Hart’s star power and passion for poker has landed him the final spot at the upcoming Super High Roller Bowl, which kicks off on May 28 at the Aria in Las Vegas. The funnyman completes the 56-player field, which brings with it a $300,000 buyin and a first place prize of $6 million. 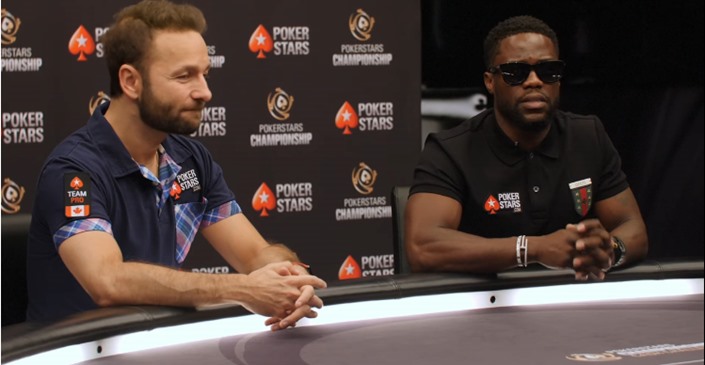 Bowling for Dollars: Kevin Hart, right, will be testing his mettle against the game’s best, like Daniel Negreanu, left, at the upcoming Aria Super High Roller Bowl in Las Vegas. (Image: PokerStars)

The event is in its third year, and has become so popular that the number of competitors was increased from 50 to 56 for 2017. The contest attracts superstars such as Daniel Negreanu and Phil Hellmuth, who will play alongside Eric Seidel and 2015 champion Brian Rast.

Thirty-five professionals are chosen through a lottery and the remaining 21 seats are filled by the Aria and reserved for pros, celebrities, and casino VIP clientele. Resort officials understandably wanted a superstar for the last spot, and Hart was an easy pick.

The standup star signed a partnership agreement with PokerStars earlier this month and said he wants to make the game fun, but he definitely takes his play seriously. Hart’s obvious following and social media pull make it easy to see why the online giant wanted to bring him on board, and he will likely play in a few of ‘Stars’ sponsored events.

Last year, the 37-year-old Philadelphia native was the top-earning comedian, raking it in from both his standups shows and movie revenues. At the beginning of this year, he took a break from Hollywood and played in a few prestigious poker events.

In January, he coughed up $300,000 to play in three high-stakes tournaments at the PokerStars Championship Bahamas, but failed to cash in any of them. But for the longtime poker enthusiast, his star was rehitched, like so many other comedians, including Ray Romano. Brad Garrett, Gabe Kaplan, and Jason Alexander, he suddenly couldn’t spend enough time at the felt.

Hart said he will be ready to play and believes he can go deep in the Aria’s three-day contest. In April, the Hollywood A-lister played in the €100,000 ($108,955) PokerStars Monte Carlo Super High Roller.

He came in with a bang, but left with a whimper. Live streaming his arrival via helicopter, he took his seat and was immediately challenged, busted out and rebought, making enough money to advance to Day 2.

A bad beat ended his tournament, however. He had 7♣7♥ and faced a bet by Byron Kaverman that would put him all-in: he immediately called. The pro had A♣4♣ and the flop was A♥3♦A♦. A 7♠ came on the turn to give the amateur a full house. But he was crushed on the river with a 4♠, sending him to the rail.

It was an ending that he hopes he won’t be seeing again in a few weeks in Sin City.