Football is back. The 2018 college football season kicks off this weekend with a handful of games that just might factor into the national championship race. And if the oddsmakers are correct, three title contenders — Notre Dame, Auburn, and Miami — will pick up crucial early season wins. 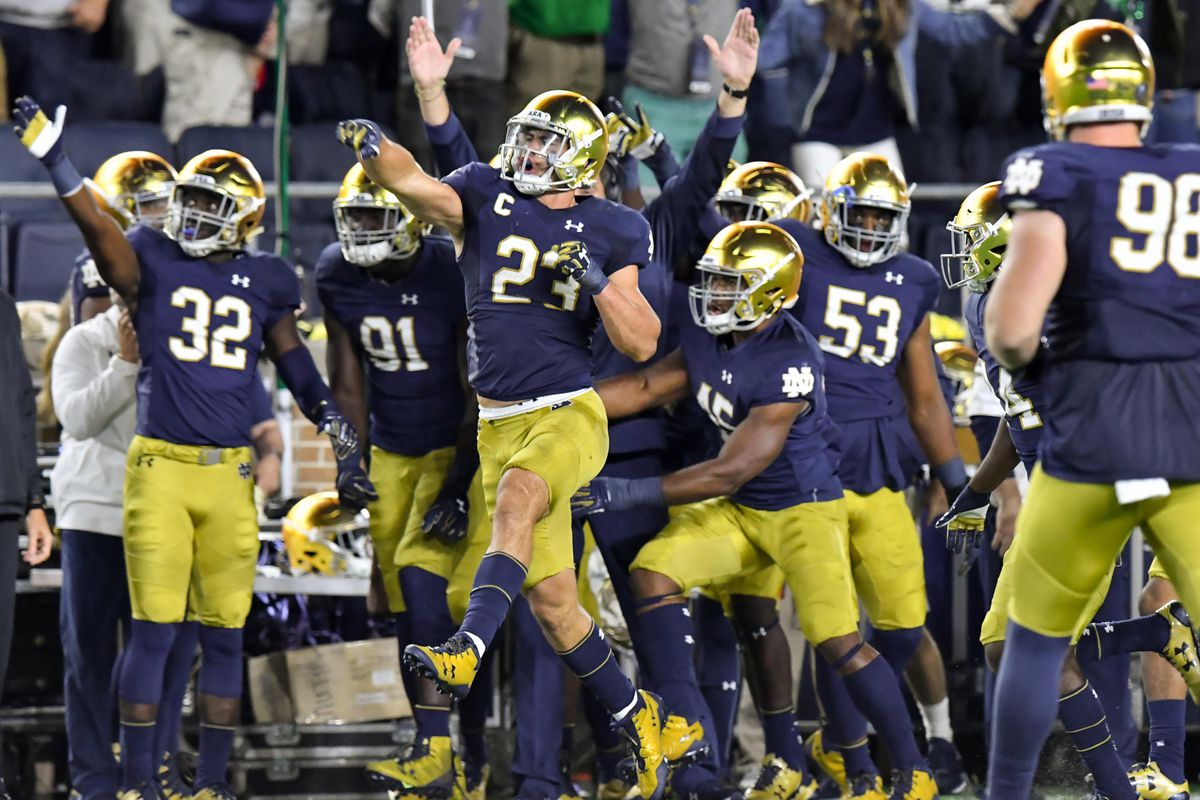 Notre Dame is looking for a huge victory against Michigan on Saturday to kick off the 2018 college football season. (Image: onefootdown.com)

These favorites, all AP top 12 teams, face difficult tests against opponents that also fantasize about winning a title. Granted, every team has this same fantasy, even doormat programs like Iowa State and Kansas.

The college football season is just days away. There are three games involving championship caliber squads that should attract some heavy betting action.

Notre Dame, the 12th-ranked college football team in the first AP poll, opens at home as a narrow 1-point favorite against rival and 14th ranked Michigan.

This game is especially crucial for Michigan head coach Jim Harbaugh, who is entering his fourth season. The former NFL quarterback dubbed “Captain Comeback” was seen as the program’s savior by the fans and when he was hired in 2015, but the honeymoon is over, and the pressure is on him to win big following a disappointing 8-5 season.

The Wolverines are expected to start Mississippi transfer Shea Patterson, a former five-star recruit, at quarterback. Michigan fans believe the highly-touted prospect will help the team improve on its horrendous offense that ranked 105th in the nation last year. And, quite frankly, the Wolverine offense was even more inept than its mediocre ranking.

If you’re handicapping this game, Patterson is a proven commodity. He threw for over 300 yards per game last year in seven games before getting injured. He’ll be facing a defense that ranked just 46th nationally in 2017.

The Fighting Irish were in contention for a national title last year before a late-season collapse. If Notre Dame has an answer for Patterson defensively, given they have homefield advantage, you should feel confident in betting on the Irish to win this pseudo-pick’em game.

Home Away from Home for Auburn

How much stock you put into homefield advantage will likely determine how you handicap the Auburn-Washington game, even though it isn’t technically a home game for either team.

The 9th-ranked Tigers head north to Atlanta as a 2.5-point favorite to face the 6th-ranked Huskies in what is considered a “neutral” game but really isn’t. You can throw out the rankings in this one. Both teams are legit national title contenders with potentially explosive offenses.

But the biggest factor for Auburn, the lower-ranked team, being favored is due to where the game is being played. Auburn’s campus is less than two hours away from Atlanta, whereas Washington’s fans have a 2,700-mile drive from campus.

On top of that, this is the third consecutive game Auburn will play in the Mercedez-Benz Stadium. Their previous two games — both losses — were in the SEC Championship Game versus Georgia in and the Peach Bowl against Central Florida.

Hurricanes Out to Prove Last Season No Fluke

Miami head coach Mark Richt is out to prove last season’s near-championship run wasn’t a blip on the radar. His opponent on Saturday, LSU, hopes to shatter Miami’s national title dreams right off the bat.

If the 25th-ranked Tigers, led by second-year coach Ed Orgeron, are to score a key opening weekend victory, they’ll have to surprise Las Vegas. LSU is a 3-3.5-point underdog, depending on the sportsbook, at home against the 8th-ranked Hurricanes.

The game is scheduled for 7:30 pm ET Sunday night in Tiger Stadium. It’s always been difficult to for opponents to win in that venue under the lights. That should tell you how much better the oddsmakers think Miami is than LSU.

With the Hurricanes favored despite facing a tough road environment, it’s quite obvious the oddsmakers think Miami is superior. But that doesn’t mean coach Orgeron’s bunch can’t pull off the upset. Or at least cover the spread, which is all we care about.