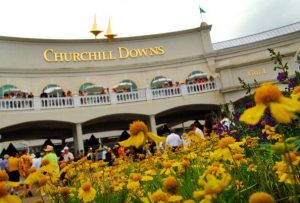 Churchill Downs is best known for its ties to horse racing and its world-renowned racetrack in Kentucky. But the Louisville-based company has broadened its horizons in recent years and continues to expand.

The foray of Churchill Downs into the poker community began with its purchase of Bluff Media in 2012, one that included a commitment to new business avenues “in the event there is a liberalization of state or federal laws with respect to Internet poker in the United States.”

The most recent financials to be revealed by Churchill Downs pertain to the first quarter of 2014 and a $700,000 loss in that period. While there were numerous reasons given for the revenue decrease, online gaming was specifically cited as an area of future growth for the company. Chairman and CEO Bob Evans was bold in his commitment to online gambling, while waiting anxiously for state and federal questions to be addressed.

Investors and analysts exhibited some concern on the earnings call regarding the Internet gaming issue, mostly regarding any return on investment that may be a long time in the future. Evans responded by expanding on his belief that the US market will develop and grow, presenting a “significant opportunity for us and for others as well.

“We plan to be a significant player in that. We’ll continue to make investments at about the current rate, at least through the rest of this year, in building the technology platform…, ” Evans added.

The company’s chief financial officer Bill Mudd confirmed that Churchill Downs spent $1.1 million on said platform development in each of the last two quarters. Evans’ remarks indicate that the same estimated amount will be allocated for online gaming development in the hopes of entering the market.

Meanwhile, Churchill Downs’ online gambling endeavors include online betting on TwinSpires.com and online real-money bingo at Luckity.com. The revenue from such gambling investments for Q1 2014 was up seven percent to $46.1 million.

In February, the publicly traded company filed a lawsuit in Louisville. Churchill Downs alleged that a New Jersey businessman named Nicholas Ribis failed to come through with a deal to partner Churchill Downs with the Showboat Atlantic City Hotel and Casino for an online gambling project. The Caesars-owned establishment reportedly wanted exclusive vendor Churchill to develop an Internet gaming system to operate in the legal New Jersey market, but Ribis neglected to finalize the deal.

Meanwhile, Churchill had paid Ribis $2.5 million as a deposit for the mediation of the deal, and the company then invested $10 million in intellectual property and the employment of more than 20 engineers to develop the platform to be used by Showboat. The company wants to recoup that money, as well as unspecified damages that will be revealed at trial.

This was not discussed in the Q1 earnings call, but the Evans’ description of the company’s dedication to continuing to pursue Internet gambling indicated that the project will move forward despite the lack of a casino partner in New Jersey.