The infamous Borgata chip fraudster, Christian Lusardi, only spent six months behind bars for his crimes against the poker community.

Lusardi hit the headlines back in 2014 when he tried to bluff his way through the Borgata’s Winter Poker Open by introducing 2.7 million worth of fake chips into the tournament. 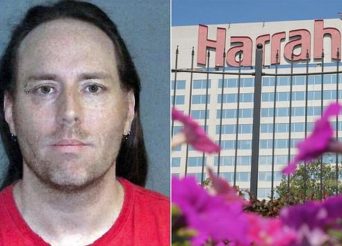 Poker players find out that Christian Lusardi was released on parole in July 2016 after just six months in prison. (Image: wncn.com)

After organizers discovered the counterfeit chips, the action was brought to halt with just 27 players remaining.

A Leak Leads to Lusardi’s Downfall

More fake chips were eventually found in the toilet at Lusardi’s room at Harrah’s, Atlantic City, after which he admitted purchasing fake poker chips in an attempt to cheat.

For that, Lusardi was sentenced to five years in prison.

Unfortunately, for Lusardi, he was also found guilty of selling bootlegged DVDs and was given additional time in prison. In between his five year sentence for counterfeit chips and three additional years for bootlegging, Lusardi was due to spend eight year behind bars.

But, thanks to some digging by members of the Poker Fraud Alert forum, Lusardi’s incarceration lasted just over six months.

A Slap on the Wrist for Lusardi

After searching the State of New Jersey Department of Corrections website (after accepting the site’s conditions), Lusardi’s name appears under the SBI Number: 000808046B. According to the official records, Lusardi was booked in December 1, 2015, and paroled on July 25, 2016.

Although the record states that his current release date is January 22, 2019, Lusardi has been out on parole since the summer of 2016. Unsurprisingly, news of Lusardi’s early release hasn’t gone down well with seasoned poker players.

“This is outrageous, given the amount of damage his actions caused, coupled with the fact that he’s a career scammer and already had a recent conviction for DVD counterfeiting on his record before this trial,” Dan Druff commented on Poker Fraud Alert.

A Slap in the Face for Players

As well as outrage from community, the news will come as little consolation for the 27 players who lost out on a potentially life-changing payday from the Borgata Winter Poker Open. With 4,812 total entrants, the final prizepool in the $500 re-entry event topped $2,325,835.

That level of interest meant the remaining players were battling it out for a top prize worth $372,123. Unfortunately, after pausing the tournament and eventually cancelling it, the final 27 players were forced to accept a payment of $19,323. On top of that, every eligible player in the event was given their $500 entry fee back plus an additional $60.

The end result was that those left in the event walked away with a lot less than they could have done had it not been for Lusardi’s actions.

Because of his actions who knows who would of the final table and while those near the end might feel like they could have gone farther ….no one knows ….the event organizers did the exact right thing and Lusardi should be banned …everywhere and online.