The PokerStars Championship’s inaugural main event, at the Atlantis Resort, Paradise Island, in the Bahamas, was won Saturday night by Christian Harder. 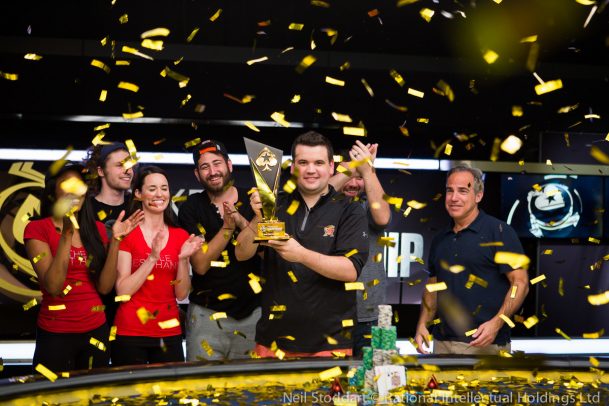 Christian Harder defeated his old backer Cliff Josephy heads up in the final of the PokerStars Championship Bahamas over the weekend. Astonishingly it was Harder’s first ever major live tournament win. (Image: Neil Stoddart / PokerStars)

The 29-year-old Maryland native picked up $429,664 after striking a deal with second-place finisher Cliff Josephy, who has been on a tear since his third-place finish at the 2016 WSOP Main Event.

Astonishingly for a man with a Hendon Mob page a mile-long, this was Harder’s first ever major live tournament win.

Of course, we use the word “inaugural” advisedly. This was, to all intents and purposes, the PokerStars Caribbean Adventure. It has been rebranded and repackaged this year, along with the EPT, but the feeling was reassuringly familiar: same venue, same structure; the same big fields and big buy-in events.

While the PCA had very much become a festival for “regs,” attracting more elite players than any other PokerStars live event, the PokerStars Championship was infused with recreational players, legions of spin and go qualifiers, which gave the field more of a “2008 vibe.”

2008 was a vintage year for the PCA, with a main event field reaching 1,136 players and a $2 million first prize for the winner, Bertrand “ElkY” Grospellier.

Also making the final table that year was a fresh-faced 20-year-old Christian Harder, who finished seventh for $200,000. It was Harder’s first serious live cash; the one that ignited his live poker career, and the first of well over 100 tournament cashes that would follow consistently over the next nine years.

By 2009, he was ranked as the number one tournament player in the world when live and online results were combined.

The Harder They Fall

Harder’s backer that year was one Cliff Josephy, who was now the only thing standing between him and his first major trophy. Since his $3.4 million third-place finish at the WSOP, Josephy has already won a WPT event and was looking to go back to back.

With the business side taken care of, the players were happy to get their chips in. After taking a few hits, Josephy shoved over the top with A-8os, and was called, after some short deliberation, by Harder, holding A-Jos.

Harder was ahead and stayed that way to the river to pick up the trophy and scratch his name off those pesky “Best Player Never to Win a Major” lists.