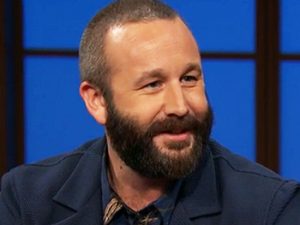 Chris O’Dowd is the latest star to join the likes of Idris Elba ready for the filming of Molly’s Game. (Image: broadway.com)

British comedy fans will know O’Dowd from his role as Roy Trenneman in Channel 4’s The IT Crowd.

However, since the show’s run ended in 2013, the Irish funnyman has become something of a darling in Hollywood.

Starring in movies such as Bridesmaids, Sapphires, Thor: The Dark World and Calvary, O’Dowd is now a bona fide big screen actor and that’s prompted Sorkin to give him a call.

According to an exclusive report by Mashable, O’Dowd has been drafted in along with Jeremy Strong, Bill Camp and Graham Green.

The quartet of stars will join Idris Elba, Michael Cera, Kevin Costner and Jennifer Chastain who will be playing Bloom. As we know by now, Sorkin’s directorial debut will attempt to recreate the high stakes world of Hollywood home games that Bloom used to run.

After her career as a competitive skier came to an end, Bloom became the host of an exclusive network of home games in the Hollywood area. Among the players who frequented the game were some of the biggest movie stars in the world, including Ben Affleck and Ed Norton.

Unfortunately, after some legal issues and a court case, Bloom was forced to step away from the home game circuit, but once the dust had settled she decided to pen a book about her experiences.

Given the lengthy title “Molly’s Game: From Hollywood’s Elite to Wall Street’s Billionaire Boys Club, My High-Stakes Adventure in the World of Underground Poker,” the book tells of high stakes bets and diva-style tantrums from a host of A-list celebs.

A Natural Fit for the Big Screen

Thanks to poker’s inherent drama and society’s natural fascination with money and fame, the book was a hit and, therefore, an obvious choice for a Hollywood movie. After a period of negotiations, Sorkin was named as the man who would take on the task of putting Bloom’s story onto film.

The screenwriter responsible for The Social Network (the movie about Facebook) will be working alongside the former head of Sony, Amy Pascal, to draw out the most interesting elements of the story and turn it into a blockbuster.

Although there’s a long way to go until the movie is in the can and ready to be screened, Sorkin has certainly made sure there’s enough star power to make it a success.

Of course, poker has often performed poorly in movie theaters (think: Lucky You), but this project looks to be different.

With O’Dowd now adding some extra muscle to an already heavyweight cast, Molly’s Game could prove to be a great advert for the poker industry.