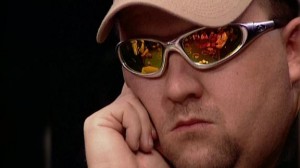 Chris Moneymaker is the new Tour Ambassador for the Hollywood Poker Open. The former World Series of Poker Main Event Champion, who is often credited for being the catalyst behind the “poker boom,” will serve as the ambassador for the Hollywood Poker Open brand and compete in various regional tournaments starting in November. Moneymaker can now be found on the tour’s website and has eight confirmed scheduled appearances.

Moneymaker is famously from Collierville, Tennessee and has a wife and three children, who all continue to reside in his hometown. Despite its name, the Hollywood Poker Open is not played in Southern California and is known for making tour stops in places like Indiana, Ohio, and Mississippi at the various Hollywood Casino properties across the United States. The deal allows Moneymaker to compete on a tour, presumably while getting paid to do it, while staying quite close to home.

When asked about the deal with the Hollywood Poker Open (HPO), Moneymaker said that his previous experience playing in the series played a large part in the decision to sign an endorsement deal.

He told the official HPO site, “Every event this past season seemed to grow and I thought it was really cool that you started to see some of the same people showing up at different stops. This tells me the word is getting out that these structures are really player-friendly and the vig is lower than their competitors. It was an easy decision when they asked me to come back and represent them for Season 3.”

Season 3 of the HPO will kick off November 13 and conclude on the 23rd in Lawrenceburg, Indiana. The next tour stop will not happen until the next calendar year, when players will congregate in the Hollywood Casino in Toledo, Ohio on February 5 through the 16th.

The third stop on the tour will take place at another Hollywood Casino, but this time in popular Tunica, Mississippi. The venue for this event is just 35 miles south of Memphis, Tennessee and boasts 54,000 square feet of casino floor. The Tunica stop will be from February 26 and run through March 8. Just a couple of weeks later, from March 26 through April 5, the fourth stop will occur in Grantville, Pennsylvania.

Finally, Season 3 of the Hollywood Poker Open will conclude at the M Resort Casino and Spa in Las Vegas. Players that participate in each tour stop’s Main Event accumulate player points and the chance to compete against Moneymaker. The promotion offers the winner a seat into the $500,000 Guaranteed Championship event in Las Vegas, which will take place in June 2015. Last year, the prize pool swelled to $1.5 million and many expect this championship event to exceed that figure.