Five months after finishing fifth in what was then the largest poker tournament in Michigan state history, Chris Meyers returned to FireKeepers Casino to win an even bigger one for $191,196. In the process, he took the lead in the Mid-States Poker Tour (MSPT) Player of the Year race. 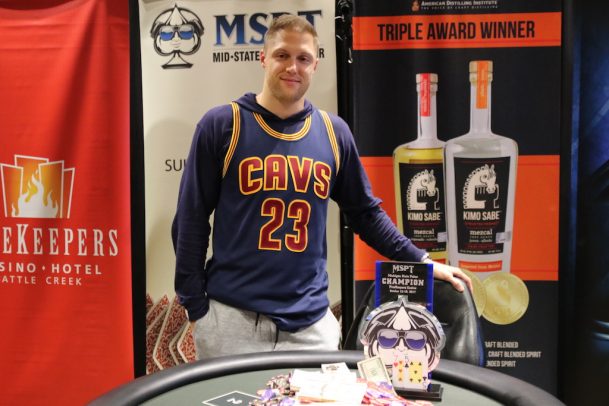 Breaking Records in the Midwest

Back in May, the MSPT FireKeepers drew 1,066 entries over three starting flights, which made it the largest tournament ever held in Michigan by both attendance and prize pool. Meyers finished fifth in that tournament for $42,333, while Mike Shanahan won it for more than $200K.

Both were back at it in this past weekend’s 2017 MSPT Michigan State Poker Championship, which broke its own record by one player. With 1,067 entries, the tournament drew back-to-back $1,000,000+ prize pools to the Midwest.

This time around, Shanahan busted in 18th place, while the 35-year-old Meyers won it all.

“I feel good,” Meyers said after the win. “I’ve put in a lot of work honestly. This was on my list, to win a MSPT. I made the final table last time, came up a little short. I thought I played well last time, and I ran really well this time to get it done.”

So, what does a newly minted state champ do with his six-figure score?

“I’m going to hit up Cleveland,” said Meyers, who planned to drive back to Buffalo. “My plans include the Cavs opener on Tuesday. I’m going to upgrade my seats a little bit. We’ll see how close we can get to the court.”

For his win, Chris Meyers earned 1,900 points on the Kimo Sabe Mezcal MSPT Season 8 Player of the Year leaderboard, which along with the 1,400 he earned in the spring brought his total up to 3,300 with four stops to go. His next closest competitor is Keith Heine with 2,967 points.

Meyers said he’ll be competing for the title, though he may have to contend with an old nemesis in Shanahan.

With 2,700 points, Shanahan currently sits third in the POY race, with only Keith Heine in between him and Meyers.

Day 2 saw 192 players return to action, but of those only 108 were slated to get paid. Among those to cash this year’s MSPT Michigan State Poke Championship were defending champ Brett Blackwood (91st for $2,274), 2016 World Series of Poker Circuit Horseshoe Hammond Main Event champ Dylan Linde (79th for $2,584), and MSPT Season 4 Player of the Year Pat Steele (27th for $5,891).

Season 8 of the MSPT continues November 3-5 at Meskwaki Casino in Tama, Iowa for a $300K GTD Main Event.