Oh Jesus! A Look Back at Chris Ferguson’s Holy Moly Year in 2017

Throughout the first decade of the new millennium, few players were as popular as Chris Ferguson, also known as “Jesus.” He was the 2000 World Series of Poker Main Event champ, beloved by fans, and a top dog for one of online poker’s biggest sites, Full Tilt Poker. 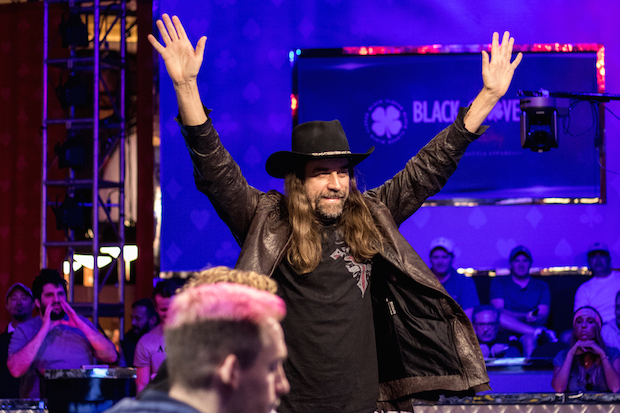 Chris Ferguson, AKA Jesus (seen here after busting the final table at the 2016 WSOP $10,000 NLHE 6-max, in which he finished fourth) may not be everyone’s favorite player, but one thing cannot be refuted: he knows what to do at a poker table. And in 2017, he demonstrated that skill set to the max. (Image: pokerlistings.com)

On Black Friday, April 15, 2011, it all came crashing down. Chris Ferguson went from poker messiah to poker pariah in a split second. For the next five years, he didn’t show his face in a poker tournament, and finally reemerged in 2016 at the WSOP, not to a welcome from all by any means, either.

Jesus’ performance gave him the Player of the Year  (POY) lead headed into the 2017 WSOP Europe and awarded him a free seat into that stop’s €10,000 Main Event.

While at the WSOP Europe, Ferguson began to pull away from the pack with six more cashes. While others were mathematically alive, Ferguson essentially locked up POY honors after winning the WSOPE Event #7: €1,650 Pot-Limit Omaha Hi-Lo 8 or Better for $45,677 and his sixth bracelet, the first since 2003.

“I feel great,” said Ferguson, who is also a three-time WSOP Circuit ring winner. “It’s kind of surreal because I wasn’t expecting to win this bracelet at all. I was just trying to sneak in, just trying to advance a little bit. And it just kind of happened. It’s the best way.”

“I just cleared my mind,” Ferguson said of being away from the game. “For five years I hadn’t really thought about poker. I didn’t really miss poker. It had been a big part of my life.

Reaction to Chris Ferguson’s great year were mixed. Those in the know, mainly those online players affected by Full Tilt Poker’s collapse, continue to harbor harsh feelings towards the ex-exec. That will likely never change. However, there were others, fans from his TV heyday and players who never played online, who have been more forgiving.

The schism also exists among the big names in poker. Negreanu continues to criticize Ferguson, insisting that he needs to address what happened with Full Tilt and ask for absolution. On the other hand, Phil Hellmuth Jr. is all about letting bygones be bygones, and even snapped a photo with Ferguson after he won his latest bracelet.

From hero to villain, from white hat to black, Chris Ferguson will always be stained by Black Friday. But in poker, they say the results speak for themselves, and in that regard, 2017 showed that he’s still a truly formidable player.

such a nice guy to get such good luck (sarcasm)