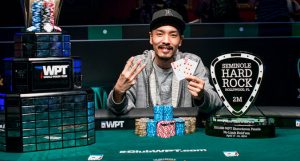 Chino Rheem topped the WPT Seminole Hard Rock Showdown Finale on Thursday night, taking his third WPT title in the process. Just three other players in WPT history have achieved this feat: Gus Hansen, Carlos Mortensen and Anthony Zinno, the latter, you may remember, grabbing all three in the space of nine crazy months last year.

Rheem picked up $705,855 for besting a field of 342 entries and a final table that included the likes of Adrian Mateos, Brian Piciolli and Aditya Prasetyo, who he defeated heads-up.

It brings Rheem’s gross lifetime tournament earnings to over $8 million; but more than that, it cements his status as a truly formidable tournament player, despite the controversy and accusations that have always dogged his career.

Rheem has been vilified as a “scammer” on the internet forums for years for his habit of not paying his debts, an issue he hinted at in his post-match interview last night.

“The ones I owe money to are coming out of the woodwork, but these are good problems to have,” he told PokerNews after the event, perhaps glancing little nervously over his shoulder.

Whatever Rheem’s issues with money, we hope they’re behind him these days, because he has undeniable talent and all the makings of a profitable tournament player. Apart from a blip in 2015, he has recorded consistently big results since he first entered the public consciousness by making the World Series of Poker Main Event final table back in 2008.

That year, he finished seventh in the WSOP Main for $1.7 million, and also picked up his first WPT title, in the Five Diamond Classic in Vegas.

“Amongst my peers, I just honestly want to be accepted as a good player, you know what I mean? That’s good enough for me,” he said last night, when asked what he wanted his legacy to be. “You’ll never hear me say I’m the best, and I know I’m not, but if my peers can say, ‘You know, Chino can play,’ then that’s good enough for me.”

He’ll get the chance to prove that tomorrow. Along with the cash prize, his victory last night gets him a free ticket into the Tournament of Champions, which kicks off today (Friday).

“I personally think I play better when I play against better players,” he said of the TOC. “Tomorrow’s tournament is definitely not a soft field, it’s going to be tough. I just hope whatever run good I used in this I still have some left over, then I can carry it on to tomorrow.”

It’s good to know that even on the heel of winning a nice purse he was still humble about his skill. Humility is always a good trait. Hope he pays down on those debts though.