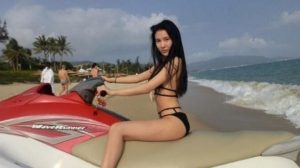 Guo Meimei before her fall. She was jailed for five years in Beijing this week on illegal gambling charges. (Image: smh.com)

A woman who gained Bilzerian-like notoriety for posting images of her luxury lifestyle on social media has been imprisoned in China for gambling offenses.

“Internet personality” Guo Meimei, 24, was sentenced to five years by the Beijing Dongcheng People’s Court, having been found guilty of running gambling operations, including high stakes poker games, from private flats she rented around Beijing.

She was initially arrested in July 2014 for illegal betting on the World Cup.

Guo attained infamy in China in 2011 when she claimed on Sinai Weibo, China’s version of Facebook, that she worked as a general manager for the Chinese Red Cross, while simultaneously posting pictures of herself driving high-end sports cars and posing with luxury handbags.

She quickly became an internet meme, making headlines in China and across the world.

And while the Chinese Red Cross denied any links to the attention-grabbing social media sensation, its revenues suffered from a 60 percent drop in donations that year.

In court, Guo cut a very different figure from her social media profile, which had so fascinated and infuriated Chinese internet users.

Wearing neutral colors and glasses, and devoid of make-up, she confessed to illegal gambling and running a high-stakes poker game, but denied operating an illegal casino.

In August, in an interview with state broadcaster China Central Television, Guo said that the poker games began when she met an unnamed foreign professional poker player in Macau.

Later, millions of yuan were gambled across the felt during the private games, Guo said, of which she would take a cut of 3 to 5 percent.

She also revealed more about the source of her extravagant wealth, which had very little to do with the Chinese Red Cross. “I have no shortage of those who want me as their mistress, there are many people who, no matter the price, want to sleep with me for a night,” she said.

“[One man] transferred 50,000 yuan to my card. And he gave me another 300,000 Hong Kong dollars to me. We had sexual relations on the day of my arrival. The next day I said I would go back to Beijing. He then bought me the air ticket and transferred another 110,000 yuan to my account after I returned.”

But ironically, for one who so craved attention on social media, this was her biggest taste yet; the Beijing Dongcheng People’s Court posted live updates throughout her trial, and the hashtag “Guo Meimei Zhao Xiaolai casino trial” was viewed more than six million times yesterday.

Sounds like a classy lady. “I have no shortage of those who want me as their mistress, there are many people who, no matter the price, want to sleep with me for a night,” she said.

Damn 5 years in prison, only in China. The lady is only trying to make a living and enjoying life.